The next full Moon is the Cold Moon, Oak Moon, Moon before Yule, Long Night Moon, Uduvapa Poya, the Karthikai Deepam Moon and the Chang’e Moon.

The Moon will be full just after midnight on Thursday morning, Dec.12, 2019, appearing “opposite” the Sun (in Earth based longitude) at 12:12 AM EST. The Moon will appear full for about three days centered on this time, from Tuesday evening through Friday morning.

The Maine Farmer’s Almanac first published Indian names for the full Moons in the 1930’s. According to this almanac, the Algonquin tribes of what is now the northern and eastern United States named the full Moon in December or the last full Moon of the fall season the Cold Moon, due to the long, cold nights. An old European name for this Moon is the Oak Moon, a name that some believe ties back to ancient druid traditions of harvesting mistletoe from oak trees first recorded by the Roman historian Pliny the Elder in the 1st century CE. The term “druid” may derive from the Proto-Indo-European roots for “oak” and “to see,” suggesting druid means “oak knower” or “oak-seer.” Europeans also called this the Moon before Yule. Yule was a 3-day winter solstice festival. In the 10th Century King Haakon I associated Yule with Christmas as part of the Christianization of Norway, and this association is now common throughout Europe.

As the full Moon closest to the winter solstice, Europeans named this the Long Night Moon. The plane of the Moon’s orbit around the Earth nearly matches the plane of the Earth’s orbit around the Sun. When the path of the Sun appears lowest in the sky for the year, the path of the full Moon opposite the Sun appears highest in the sky. For the Washington, DC, area, on Wednesday evening, December 11, 2019, moonrise will be at 4:35 PM, sunset will be 11 minutes later at 4:46 PM, the Moon will reach its highest point of the night (72.2 degrees above the horizon) just after midnight at 12:02 AM on Thursday morning, sunrise will be at 7:17 AM, and moonset will be 16 minutes later at 7:33 AM EST. The Moon will be in the sky for a total of 14 hours 58 minutes, with 14 hours 13 minutes of this when the Sun is down, making Wednesday night into Thursday morning, December 11 to 12, 2019, the longest full Moon night of the year. 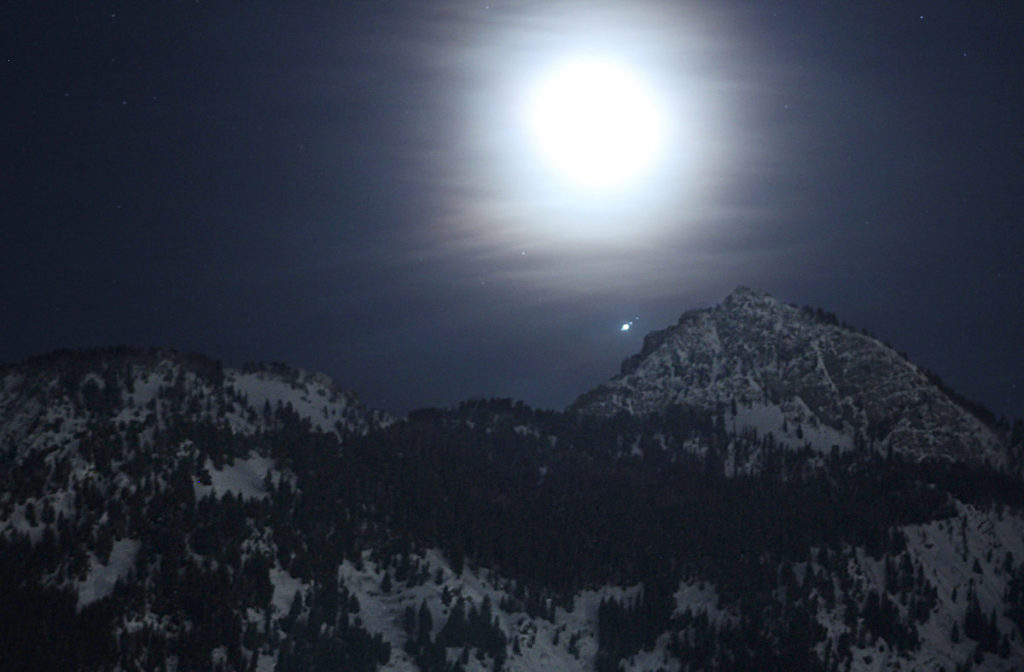