Catch-and release fishing has become an increasingly popular practice among many anglers throughout the country. Compliance with bag and size limits means many anglers, by law, have to return fish they have caught to the water. It is also quite common for anglers with a commitment to conservation to release fish they could legally keep.

Whether by regulation or choice, using best handling practices for catch-and-release fishing is a skill all anglers should know. Every effort should be made to release fish quickly and unharmed. Recent research has shown that the survival rate for many species of fish is greatly increased if proper handling practices are used for releasing angled fish. Based on the science, a series of nine best practices for catch-and-release are presented here

Use the Appropriate Tackle. To ensure that you release a fish in the healthiest condition, use tackle that is matched to the species for which you’re fishing so you can land it before it is exhausted. Fighting a fish too long unduly stresses the fish, and in some species, over-exhaustion increases the chances of it being preyed upon when released.

Barbless Hooks. Hooks can be purchased as barbless, or alternatively the barb can be pinched down with pliers to make them barbless. Barbless hooks reduce the chance a fish will be gut hooked. In addition, barbless hooks are much easier to remove, which reduces damage to the fish and minimizes the time the fish is out of the water. Pinching your barbs down is also a safety precaution when fishing with kids and treble hooks. Even though barbless hooks do less harm to fish, many anglers can be reluctant to use them as fish can be harder to land. We suggest giving it a try as your fishing style may work well with barbless hooks. Many anglers enjoy the added challenge and quickly adjust.

Circle Hooks. Fish caught on circle hooks are generally hooked in the mouth and are therefore easily released. In addition, their use rarely results in deep hooking, so they are very effective for catch and release. See here for more information about cirlce hooks.

Artificial Lures. Depending on the condition and species, artificial lures may be the best choice when practicing catch and release. One disadvantage of using live bait is that the fish is more likely to swallow the hook; therefore using artificial lures when possible will increase the chances of survival when releasing your catch.

Live Bait. Using live bait can be a strong fishing tool at the right time and place. When bait fishing, use circle hooks to maximize the likelihood of the hook being lodged in the jaw and thus minimizing damage from gut hooking. If a hook is deep inside the fish, cut off the line and leave the hook in the fish as the hooks tend to work themselves free or rust out without harming the fish. Another key component of best fishing practices is to help stop the spread of exotic fish, so please only use fish species or other baits that are either permitted by regulation or are from the waters you are fishing.

De-Hookers. Whether you prefer needle-nosed pliers, a commercial de-hooker or hemostats, it is helpful to have these nearby when you land your fish. They can greatly reduce damage to the fish and can help minimize time the fish is out of the water.

Umbrella Rigs. Anglers use bait spreaders and umbrella rigs to separate lures and hooks from tangling. They are designed so your swim baits combine to represent a small school of baitfish. The Alabama Rig is an example and is increasingly popular with anglers fishing for bass. Keep in mind that to stay within the legal possession limit, one cast with an umbrella rig could put an angler over the limit if there are already several fish on a stringer or in a live well. Currently, experiments are being conducted to see if fish caught and released on an umbrella rig have decreased survival rates. These multi-hook rigs are only legal on Illinois waters that do not have the “2 poles only with 2 hooks or lures per pole” regulation. Be sure to know the regulations for the body of water where you’re fishing.

Nets. Using a net to land a fish can cause fin damage and remove the protective mucus layer of the fish, making it susceptible to fungus. However, when fishing for larger fish with teeth, such as muskie or walleye, a net can be necessary. To best protect the fish from harm, a rubber netting rather than a knotted mesh material is preferred. Rubber netting decreases abrasion on the fish and can prevent hooks from entangling, even when using treble hooks. To assist in handling large fish (e.g., muskellunge), the use of cradles is recommended to minimize stress to the fish. Fish cradles allow the fish to be restrained in the water while removing hooks.

The average mortality associated with improper catch-and-release techniques is 16.2%. Help your catch survive by following our guidelines for best practices.

One of the key assumptions that encourages the use of catch-and-release practices, both by anglers and fisheries managers, is that released fish actually survive the experience. This assumption comes from the observation that when fish are released after being caught, they generally swim away, apparently unharmed. However, research indicates that mortality occurs some time after release, thus fish that appear healthy upon release may later exhibit injuries or distress caused by improper catch-and-release practices. Therefore, it is important for anglers to properly handle fish they intend to release to reduce injury and increase the chance of survival.

Be sure to think ahead and have all equipment you’ll need close at hand so you are prepared when you have a fish on the line.

There are three main factors that affect breathing in fish. Keep these in mind when angling during the hot summer months and take extra care with your fish.

In a study that assessed air exposure, fish that are held in the air for 30 seconds required 2 hours for full cardiac recovery, while fish that were exposed to air for 3 minutes required 4 hours to fully recover (Cooke et al., 2001).

Several studies conducted by fisheries scientists in Illinois have demonstrated the detrimental effects of air exposure and highlight the need to reduce handling time and air exposure. We have provided a list of these studies in the Science section of Best Practices.

Releasing a fish and watching it swim away unharmed is a wonderful feeling. You can still get a great photo of that fish prior to releasing it. Absolutely you should preserve the memory of your catch, and by following the guidelines below, you can ensure that fish can bring enjoyment to another angler: 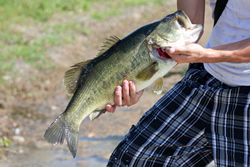 BAD Although the fish in this photo has its body weight supported, the hands are in contact with the gills. Damage can occur to the sensitive gill tissue, especially if there are oils or sunscreen on your hands, so avoid holding fish for a photograph this way. 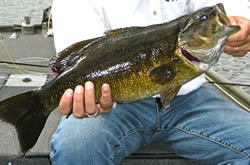 GOOD It is best to hold your fish horizontally so the fish is supported and the full weight is not just on the mouth. 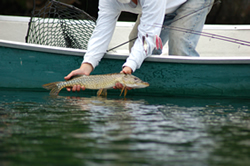 GOOD Great photos can be taken while holding the fish just above the water, which minimizes air exposure.

BAD Holding bass by their lower jaw is common practice and helps keep the fish under control, however, it is best to avoid over-extending the jaw as this can damage jaw muscles and affects the ability to feed when the fish is returned to the water. 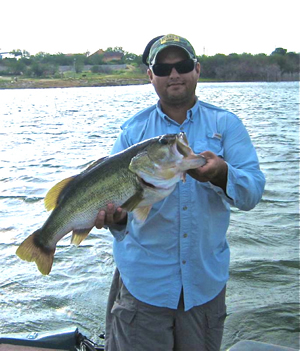 GOOD A great fish and a great photo. This hefty largemouth bass has its weight fully supported with minimal skin contact with the angler. The fish can quickly be returned to the lake.

A good rule of thumb, backed by research conducted by Dr. Cory Suski from the University of Illinois, is to keep the time from when a fish is hooked to the time when it is ready to be released to 4 minutes or less.

What happens to a fish when it is angled? How long a fish is being angled and how hard it fights are important factors in catch and release.

Conservation fish physiology is a newer discipline that applies the tools of physiologists to understand what happens to a fish when it is angled under certain conditions, how long it takes to recover, and what the longer-term impact could be. For instance, if a fish is angled to exhaustion, how does that impact its ability to feed, to avoid predators, and/or to reproduce that year?

Similar to when we exert ourselves, angling causes physiological stress in the fish — the bigger the event (such as the duration of fight time), the bigger the effect. Some of these physiological changes are the depletion of energy reserves, accumulation of lactate, and the change of acidity in the blood. Recovery time in fish that are released is of big interest to fisheries scientists as it can help them understand how angling events affect growth, reproduction, or mortality.

Recently an important study has shown that fish will recover from the stress of angling much faster if the duration of the fight time is shorter. Therefore, anglers should try to land fish as quickly as possible to guard against too much physiological disturbance. 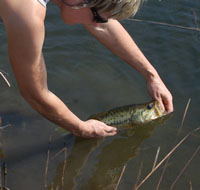 Sometimes a fish needs some help before being safely released. This helps ensure that it will not be preyed upon or otherwise be compromised to the point where it may not survive. Generally, exhaustion is the result of a long fight, but not always. If the fish appears lethargic or is having difficulty swimming, it can be revived with a little help from the angler.

If you are fishing in a stream, it is best to orient the fish’s head into the current. Allow the fish to resuscitate in the current by cradling it gently with both hands along its belly. Bigger fish may require you to gently hold their tail while using your other hand under the fish to cradle it. In a lake, gently support the fish and slowly move the fish backward and forward, forcing water through its gills. When the fish seems revived and able to swim away, it is safe to release it.

Angling During the Spawning Season

A male bass guarding its nest. The eggs are highlighted in white. The male will chase away any other fish that comes near to the nest.

The spawning season is the time of year when a fish species reproduces, which is obviously critical for sustaining fish populations.

For some species, such as largemouth bass and bluegill, reproduction includes male parental care. For largemouth and smallmouth bass, when water temperatures in the spring begin to reach 57°F, males begin to build nests, court females, and spawn. They then stay on the nest site through egg hatching and fry development and leave only when the offspring begin to disperse from their fry balls. Males do not actively forage during this time, but will feed opportunistically. They are vulnerable to angling during the nesting period as they are territorial and aggressive to any object that could potentially be a nest predator or looks like food. If a male is caught off the nest and removed, the nest is left unguarded against brood predators. Sunfish, catfish, and minnows can all be potential predators, and once it is clear the male is away, they will quickly move in to consume the eggs or fry. How quickly a male can return to its nest after angling depends on if the fish is exhausted, how much air exposure there was, and the time the fish spent away from the nest.

Safe catch and release techniques are important to the health of the fish.