The Atlantic Hurricane Season has already been one for the record books and has been far more active than normal thus far. In an average season, we will find 1 or 2 named tropical cyclones (those of Tropical Storm or Hurricane strength) prior to 1 August. However, in 2020 nine such cyclones have already formed, due in large part to warmer than normal sea surface temperatures and lighter winds aloft. This has been especially prevalent across the Gulf of Mexico and the Far Western Tropical Atlantic, where many of these systems have formed.

The latest system of note, Tropical Cyclone Isaias, the earliest ninth named storm on record, helped to buck the trend. Contrary to many of its predecessors, Isaias began as a more commonly seen “Cape Verde” system, having tracked westward across the Tropical Atlantic into the Eastern Caribbean in late July. However, Isaias really made its presence known as the storm became better organized north of Hispaniola and moved rapidly toward the Northern and Western Bahamas and the Florida Peninsula before the system turned northward, eventually moving inland across the U.S. Mid-Atlantic States and New England during the 3-4 August timeframe.

For those along the U.S. East Coast, impacts were mainly felt in the form of:

What does the future hold for the rest of the season (through 30 November)? Time will tell of course, though indications of “La Nina” conditions and warmer sea surface temperatures will continue the active trend through autumn. We expect above normal and likely well above normal activity to continue through the remainder of the season.

In the meantime, stay safe and stay informed.

Weather Routing Inc. (WRI) prides itself as the World Leader in yacht forecasting, providing customized routing and forecast services to yachtsmen worldwide. Forecasts are customized for your yacht based on weather and loading constraints, time constraints and more. WRI’s SeaWeather online weather information service offers unlimited access to real-time/forecast data, a tropical cyclone tracker, and interactive Voyage Planner page, an Onboard platform for those with limited bandwidth, and much more. 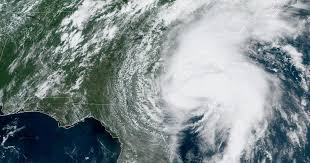