Boating 101: How to Read Navigational Charts

There’s an old saying you used to hear that states: “It’s not where you’re going, it’s how you get there.” With the speed and accuracy of today’s chart plotters, it seems like the “how” part of boating has never been easier.

But don’t let the ease of use of today’s navigation technology lull you into a false sense of security. At the very least, before you head out on a cruise where you will be relying on charting software, you should know how to read a chart. Let’s take a look at some of the basic symbols and numbers on charts and what they all mean.

For the sake of simplicity, I’m going to focus on the official symbols found on the National Oceanic and Atmospheric Administration’s paper charts. Navigation companies scan these to appear on your plotter’s display as raster charts. For the more dynamic vector charts, some of the symbols, and the chart itself, might appear differently depending on the software provider.

Perhaps the easiest thing to identify—and misuse—on every paper chart is the compass rose. It will typically display with an outer and inner ring. The outer ring will have a star at the top indicating true north, which is geographic north. However, the inner circle indicates magnetic north, the direction to the magnetic pole. The direction your electronic nav unit indicates is compass north, which is based on computing for local magnetic variation and the boat’s heading. (Aren’t you glad you no longer have to do this manually?) The direction that your boat’s compass—which every boat should have—points is not the same because offsets for deviation (affected by heading) and variation (affected by location) need to be manually accounted for. On the chart, magnetic north will have a smaller arrow pointing slightly off-kilter to the star that indicates true north. A boat’s compass might never match that of the compass rose. 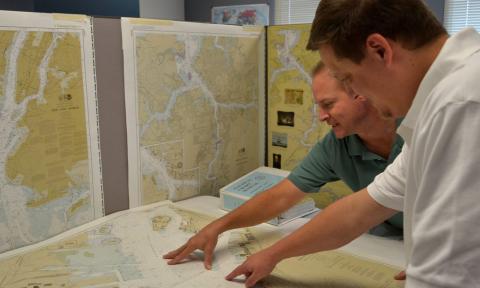