Who Do You Call When Your Kayak Sinks?

Treading Water three miles off shore is no place for a wrong number.

Christian Nelson didn’t know the trouble he was in. He was three miles out from Gulf Shores Alabama when the kayak he was trolling from developed a 9-inch crack between the scupper holes. He didn’t notice the damage until the kayak was full of water and on the verge of sinking.

“It feels bottom-heavy,” he told his friend Bryan Llanes. Thirty seconds later he was in the Gulf of Mexico, treading water with a 2/0 circle hook buried in his shin. He reached for the pair of life jackets he kept stowed in the kayak’s center hatch, one for him and one for Bryan. He managed to shimmy into his and get it buckled, but Bryan’s life jacket floated away as Christian struggled to save himself and his gear. Christian kept his video camera rolling throughout the ordeal, and later uploaded a 20-minute edited clip to his YouTube channel, FishinAll50.

It was a cool day in February, with air temperatures in the 50s and the water not much warmer—hypothermia conditions, especially for a man dressed in jeans and a light jacket. Bryan was even less prepared for cold weather, in only shorts and a hooded sweatshirt. He did, however, have his cell phone and it was picking up a couple bars of service.

Bryan pulled up Google, typed “Coast Guard Gulf Shores” into the search box, and called the first number that popped up. The U.S. Coast Guard rescue coordination center in New Orleans is on standby 24-7 to direct search and rescue operations on the Gulf Coast. But that’s not the Coast Guard office Bryan reached.

This is one of the best reasons not to rely exclusively on a cell phone in a maritime emergency: It’s only as good as the number you call.

If they only have a cell phone, they should put the direct number to their region’s Rescue Coordination Center on speed dial, Barnard says. The next best option is to call 911.

Christian’s chilly close call in the Gulf of Mexico shows why. The Coast Guardsman who took Bryan’s call had to act as a middleman. He asked for the kayakers’ position, a description of their kayaks, and physical condition—then told Bryan to hold the phone as he relayed the information. That took time.

Coast Guard Rescue Coordination Centers and most 911 call centers have equipment that can pinpoint the location of a cell phone, but the office Bryan was talking to didn’t have that capability. He tried to describe their position based on where they launched and landmarks on shore, with Christian’s help. “We launched at the Gulf State Park pavilion,” said Christian, clinging to the side of Bryan’s kayak. “We’re straight out from a blue water tower.” 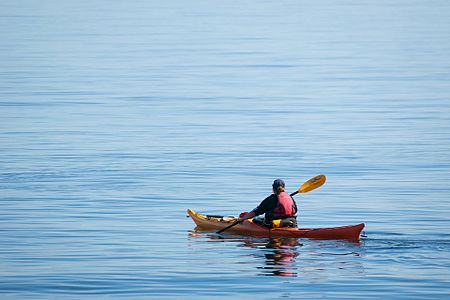