SF Baykeeper continues to advise caution against contacting the murky, discolored waters or eating fish and shellfish from affected areas; a heat wave over Labor Day weekend may exacerbate the situation.

An algal bloom, or “red tide”, that emerged in late July has grown and now affects shorelines around North, South, and Central San Francisco Bay.

Since late August, we have received increasingly frequent reports of unprecedented numbers of dead fish – large sturgeon, sharks, rays, and striped bass, as well as masses of smaller fish – in the water and on shorelines, including Point Molate, Keller Beach, Alameda, and Hayward in the East Bay, and the Marin and San Mateo coastlines on the west side of the Bay.

Our scientists have been monitoring the situation and are in communication with relevant agencies and researchers. Both the California Department of Public Health and the National Oceanic and Atmospheric Administration first identified the dominant algal species forming the bloom as Heterosigma akashiwo – a species that, when it forms a bloom, is associated with fish kills in other places. The US Geological Service and San Francisco Estuary Institute (SFEI) confirm high densities of H. akashiwo, from around south and central San Francisco Bay and San Pablo Bay.

While not generally considered an acute risk to people, Heterosigma akashiwo is a lesser-studied algae that can emit toxins and lead to low dissolved oxygen, harming fish and wildlife. Heterosigma akashiwo is always present in the Bay at background levels, but has not formed a noteworthy bloom since the early 2000’s. Given uncertainty over health impacts to people and pets, we advise caution when considering recreating in the Bay or consuming fish, and particularly shellfish, caught in affected areas.

The algae will die off eventually as the days get shorter, temperatures cool off, and the bloom exhausts its supply of nutrients.

If you notice an unusually large number of dead or struggling fish near the shoreline, please report it with this observation form from our partners at SFEI and report it to your local public works agency. 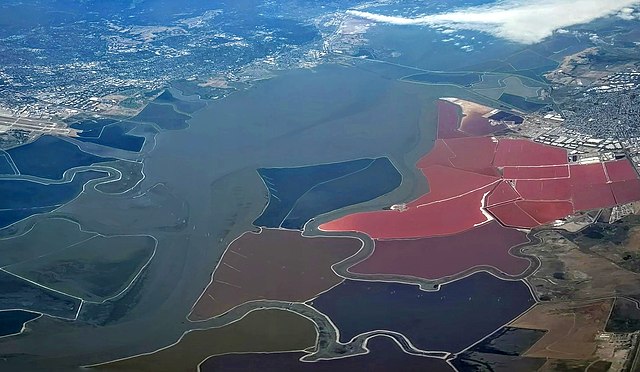