Sargassum is a brown macroalgae (also known as seaweed) that floats on the surface of the ocean and provides a critical habitat for fish and sea turtles; however, Sargassum can pose a problem when it blooms in mass quantities and washes up on beaches. Decomposing Sargassum not only creates costly clean-up operations for beach communities but also produces hydrogen sulfide gas which can cause breathing difficulties in humans.

Large mats of Sargassum have been washing ashore in the Southeast U.S., Gulf of Mexico, and Caribbean islands. The Sargassum Watch System (SaWS), developed by Dr. Chuanmin Hu and his team at the University of South Florida, is a tool to forecast and monitor Sargassum trajectory and location.

SaWS provides real-time information on Sargassum location and amount using satellite images. These images are accessible online by all users, and are compatible with Google Earth.

“We monitor and study Sargassum to satisfy our scientific curiosity and to serve the people.” — Dr. Chuanmin Hu, University of South Florida

SaWS provides imaging from the Caribbean, Western Atlantic Ocean, Gulf of Mexico, and Western Africa. A bulletin is released at the end of every month providing the present Sargassum outlook and a prediction extending over two months.

SaWS allows local managers to prepare equipment and personnel and to take swift action when a Sargassum bloom is expected to impact certain areas. For example, the Belize National Meteorological Service uses SaWS to track Sargassum in order to deploy debris booms. The booms block the seaweed from reaching the beach, allowing for easy collection from the water.

Many islands in the Caribbean heavily rely on desalination for safe drinking water during the drought season. Read more at  secoora.org 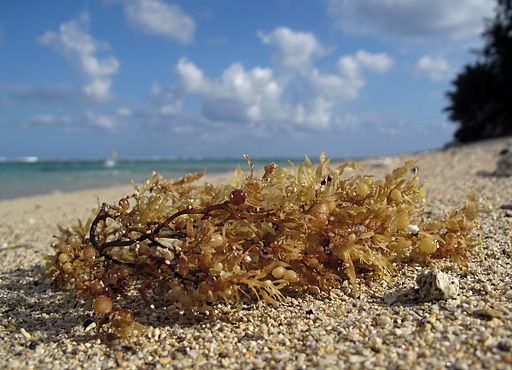