Bodega Harbor, in the N part of Bodega Bay, is an important commercial fishing base and, in season, an active sports fishing and recreation harbor. During salmon season more than 500 fishing craft either anchor just outside in the shelter of the N part of the bay or dock at the numerous marinas inside the harbor.

Transient berths with electricity, gasoline, diesel fuel, ice, water, and some marine supplies and provisions can be obtained in the harbor. The marina at Spud Point on the W side of the harbor has the largest lift in the area, which can handle boats up to 20 tons. Hull, engine, and electronic repairs, launching ramps, and winter dry and wet storage are available in the harbor. A channel marked by private buoys and a light, leads from the main channel just SW of the outer turning basin to a marina at the NW side of the harbor.
Bodega Bay Coast Guard Station is on the E side of the channel, 0.8 mile above the entrance.
Navigation:
Click the “Map View” button above to see a chart of this harbor.
Bodega Head Light (38°18’01″N., 123°03’14″W.), 110 feet above the water, is shown from a post with a red and white diamond-shaped daymark on the SE end of Bodega Head.
In good weather small boats having local knowledge sometimes use the passage between Bodega Head and Bodega Rock. The passage is unsafe whenever breakers from heavy ground swells reduce the width of the passage. Large breaking waves can occur inside the 30-foot depth contour line NW and SW of Bodega Rock. The safest part of the passage between Bodega Head and Bodega Rock is along the deeper part of the passage. When the width of the passage is reduced by breakers, mariners entering Bodega Bay should pass S of Bodega Harbor Approach Lighted Gong Buoy BA.
A Federal project provides for a 12-foot channel, protected by entrance jetties, which leads from Bodega Bay to facilities along the N and NE sides of the harbor at the town of Bodega Bay. The channel has a turning basin just inside the entrance, at the N end of the harbor and along the NE side of the harbor. The channel is marked by buoys, daybeacons, and lights; lighted ranges also mark the channel from the entrance to the turning basin at the N end of the harbor.

On Monday, April 18th 2022 voting began in our 4th annual “Best Harbor in the U.S.” contest! Participation is free and open to everyone. Vote for your harbor HERE. Voting for this year’s Best Harbor contest is open from April 18th through May 31st, 2022. Participation is limited to one vote… END_OF_DOCUMENT_TOKEN_TO_BE_REPLACED 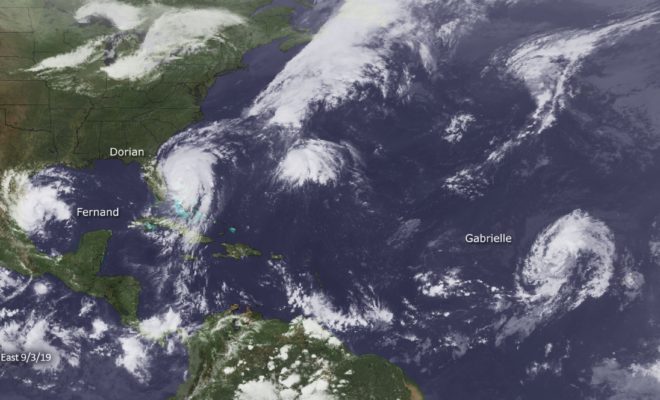 Biden Warns of ‘Another Tough Hurricane Season’ this Year

By Zeke Miller and Chris Megerian. JOINT BASE ANDREWS, Md. (AP) — President Joe Biden warned Wednesday that the country will likely see “another tough hurricane season” this year, and he pledged that his administration was prepared to respond to the storms and help Americans recover from them. “We know… END_OF_DOCUMENT_TOKEN_TO_BE_REPLACED

April 2022 was slightly cooler and wetter than normal across the contiguous U.S., according to the National Centers for Environmental Information. What made the month standout was an early start to the wildfire season, several tornado outbreaks and a widespread Western drought. Below are more takeaways from NOAA’s latest monthly U.S.… END_OF_DOCUMENT_TOKEN_TO_BE_REPLACED

By John Page Williams. Hooray for spring! It’s time to get out on the water. But first, make sure your boat is ready to run smoothly, reliably, and safely. (And even if you have been fishing all winter, it’s a good time to check over your rig for an even… END_OF_DOCUMENT_TOKEN_TO_BE_REPLACED