Boaters pulling into Camden have no shortage of watering holes to choose from, whether they’re looking for dockside drinks or New England-style pub fare and brews served in Mason jars. But for nearly three years sailors and yachtsmen in search of a more refined culinary experience have been making the two-block trek from the public landing to Brevetto, Josh Hixson’s wine bar and restaurant in the old Knox Woolen Mill. Hixson developed a distinctly cultured niche among Camden’s other dining options, earning an impressive list of positive reviews ranging from the Portland Press Herald to Yelp.com and, perhaps most importantly, Camden locals and visitors.

So it came as a bit of a surprise when Brevetto closed its doors in January, but the shutdown was only temporary. Hixson has reinvented his restaurant literally a stone’s throw away as the chic and even more elegant 40 Paper, an Italian Bistro & Bar. With seating for up to sixty in two separate dining areas, the new restaurant at the base of the mill’s smokestack has significantly more capacity than Brevetto. But thoughtful touches such as sound-dampening “acoustic clouds” and individual volume controls on every speaker prove that each diner’s experience is Hixson’s highest priority. Gorgeous round wooden tables, comfortable seating and an impressive butcher-block bar that is twice the size of the one in Brevetto add to the comfortable atmosphere. Perhaps most importantly, the menu has gone through a similar evolution, expanding to include fresh hand-cut pasta, flatbread pizzas and antipasti, as well as the other northern regional Italian cuisine that put Brevetto on the gourmand map.

There’s nothing quite like kicking back with a pint after a day on the bay, but there are certainly evenings when we all wouldn’t mind putting on our nice duds and taking in a more urban experience. 40 Paper promises to be a delightful new flavor on the local menu. 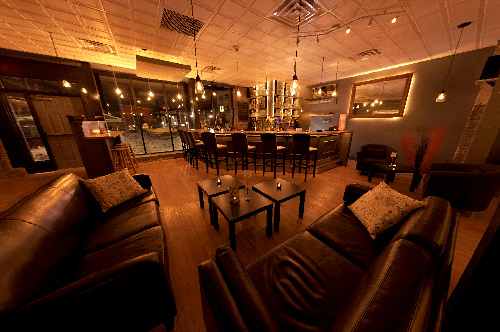 Photos of New Camden Restaurant from a Favorite Local Chef