Woods Hole, the infamous current-ripped passage between Vineyard Sound and Buzzards Bay, gives me the willies. The combination of the racing current in the channel and rocks not far out of the channel is a bit too thrilling for me. But by timing our passage correctly, paying close attention to the charts, our chartplotter, and other boat traffic, we’ve had no mishaps.

There is a reward for us at the end of The Straight. Hadley Harbor is on the Buzzards Bay side of Woods Hole, on the southeast side of Uncatena Island. It’s often a last stop before beginning our exodus home to Maine. Snug, very beautiful, it’s hard for us not to spend the night, now that we’ve seen Hadley.

There’s space to anchor in the outer harbor and in our September visits there’s been room to do so. Private moorings and the main ferry channel to private Nashon Island fill the inner harbor. While the shoreline around Hadley is privately owned, Bull Island is open to the public to explore and even walk the dog.

Enjoying the late afternoon sun in the cockpit on our last visit, a distant glimpse of white caught my eye. The crisp angular shape of a white working jib pierced through the trees at the harbor entrance to reveal that a small sloop was reaching into the harbor. It was quickly followed by another, identical sloop, and then another, and another. Soon, like a cloud of butterflies, the harbor entrance was alive with bright white sails. A race!

And it was headed our way.

As bows pointed in our direction, close-hauled sails swayed like sabers and flashed white as the tacking duels closed on us.

Then we were surrounded. Racers sped past our bow and stern. Local knowledge allowed a few to slice through the skinny water off Bull Island and along Goats Neck. Then they all turned to windward and headed for the mark at the head of the inner harbor. People on moored boats couldn’t resist coming up on deck to enjoy the spectacle. It was an event.

At the head of the harbor, we watched the leader spin around the windward mark with the fleet not far behind. On they zipped, back toward us at various angles, now on fast broad reaches. The fleet used the entire harbor, including slots between moored boats. Some crisscrossed wakes, slicing their way downwind.

As the retreating fleet passed our bow, we took more photos. They had great speed reaching and running back toward the distant harbor entrance.

In the distance, we watched the white sail of the leader head out of the harbor, and disappear in the trees. Not far behind, another racer disappeared, and then another, and then the fleet was gone.

This is the same course that the event’s founders, John Valois and Prince S. Crowell, II, sailed in the first John and Prince’s Folly, 50 years ago. A half-century later, it’s still delighting participants and those fortunate enough to watch it pass by. 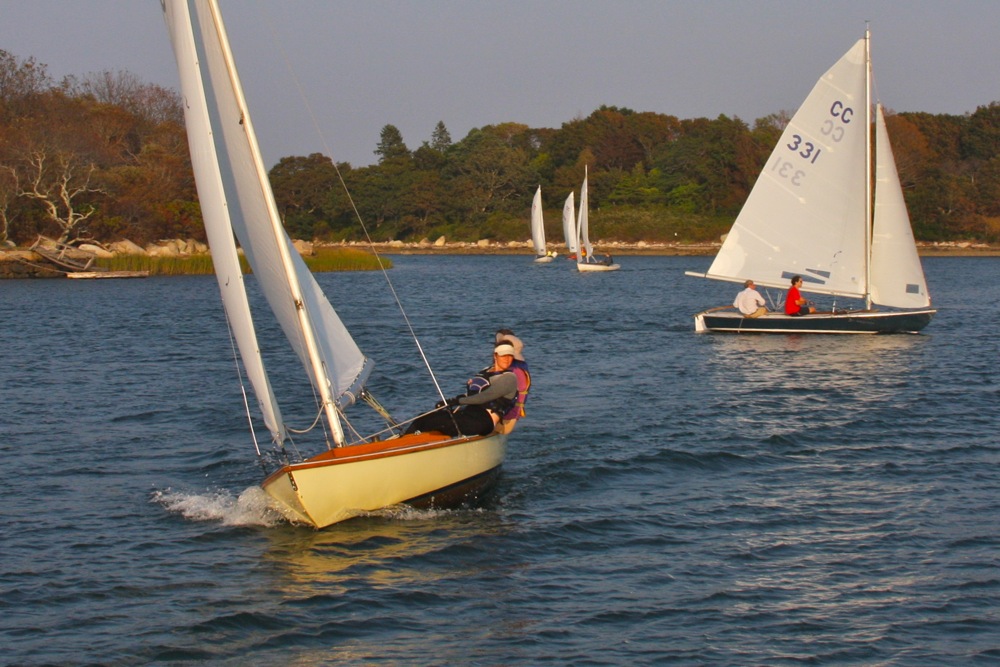 Photos of Enjoying Knockabouts and Evening in Hadley Harbor