Following a Thread of Water Through Merchants Row

Sailing out of the eastern end of the Fox Island Thorofare, the distant coast ahead from huge Deer Isle all the way to high Isle Au Haut appears to be continuous. It’s not until we’ve sailed halfway across the bay that the solid green between the big islands begins to fragment and drift apart.

Then we see them. Islands! Dozens of jewel-like, dark, green, jagged-topped islands on a sparkling blue sea, stretching far ahead.

If there’s a watery counterpart to the Enchanted forest, my vote would go to the islands of Merchants Row. Broad reaching past Scraggy Island, a maze of waterways opens up ahead and lures us onward toward Potato, Devil, and Wreck Islands, just to name a few. We sail slowly, keeping track of our position. There are rocks to avoid (they’re well-charted). Green ledges glow in the sun, with aprons of bright mustard-colored rockweed.

Passing watery threads between pink granite banks, I spot new places to drop the hook every time I sail through. Occasional glimpses of white sand beaches and crystal-clear iridescent blue water look startlingly like something you’d see in the Caribbean. The worn granite shorelines appear soft and leathery. Due to the unique natural elements that make up this unusual area, it has a rare beauty like no other place I’ve sailed.

The popular anchorages at McGlathery, Hells Half Acre, Bold, and Merchant Islands, to name just a few, are all exceptionally beautiful anchorages. Some will draw a crowd in high season, but not being able to find space to anchor is rare.

Enjoy poking around before dropping the hook. Merchants Row lends itself to discovering your own private destination for a few hours or the night.

Most boats will pass or enter the Merchant Islands via the Deer Island Thorofare, a picturesque well-marked waterway that passes through the beautiful fishing harbor of Stonington. If you’d like to go ashore at Stonington Village, you can make a long dinghy run to the convenient town-owned dinghy dock from several anchorages in the Merchant Islands.

A closer option is to anchor next to Crotch Island, north of Mill Pond, or in the cove created by Scott and Green Islands, to the east, weather permitting. This area gives easy dinghy access to the town (a short row for us) to explore Stonington and Deer Isle. Crotch Island and this vicinity has its own beauty, including a few close-by beaches to explore (Rock Island has an especially nice beach). Dinghy up Mill Pond on a rising tide to see the remnants of the bygone granite quarry era on Crotch Island (it’s still in operation today, though on a much smaller scale).

After a day onshore combing Deer Isle, you may want to meander back into the islands of Merchants Row, and let the fir- and spruce-covered islands close in around you.

One of the many watery threads through the pink granite of Merchants Row. Photo by Tom Young/USHarbors.com.

Photos of Following a Thread of Water Through Merchants Row 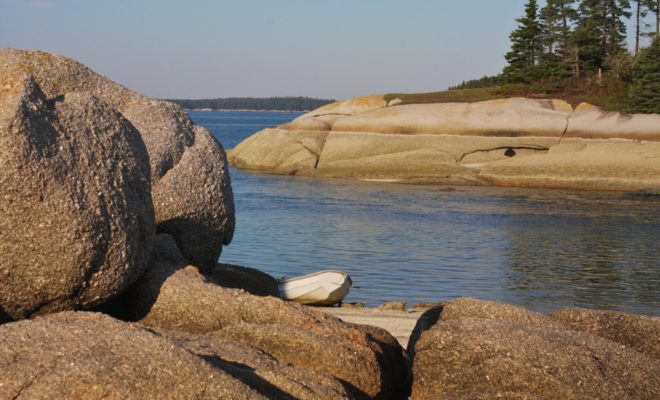 One of the many watery threads through the pink granite of Merchants Row. Photo by Tom Young/USHarbors.com.