Between Two Rivers, a Snowy Spit of Downeast Sand

Take a look at a map of Washington County, Maine, and you will find a convoluted coastline, full of pastoral peninsulas, craggy inlets, and countless rivers and bays that all flow into the Gulf of Maine.

Find the river town of Harrington and trace your finger due south, where a narrow peninsula leads to a square-shaped stretch of land known as Ripley Neck. Here, snuggled between the towns of Milbridge to the west and South Addison to the east, the icy waters of the Harrington and Pleasant rivers meet and surround the Neck, a small gem of Downeast coastline.

The peninsula is wild in nature, with blueberry barrens and overgrown fields framing the dusty dirt roads that lead nine miles south to the land’s edge. Old, tidy, weathered houses stand proud against the stark landscape and harsh weather that has stripped so many shingles of their paint and caused frost heaves to resemble small mountains of dirt, covered in snow and salty sea spray. American flags wave in the winter wind while lobster traps sit, seemingly stacked to the sky, in front yards and wooden docks.

A local woman, out for a cigarette, warns me of the impending snow storm and even offers me a seat in front of her woodstove, which is sending giant plumes of grey smoke into the early morning air. I politely decline her offer and ask for directions to Carrying Place Cove, where I had seen a sandy beach on the map. She smiles and points me down the road. “Only way to go,” she says. “Hope you find it.”

This unnamed beach, which sits on the western side of the Neck, literally shoots out into Pleasant Bay, forming a crescent shaped spit of sand. I find it all right, after a few wrong turns and a long walk that led directly into the oncoming snowstorm. It is magnificent! Covered in a thin coating of wind-driven snow, the beach stretches out into the ocean like an appendage on someone’s body. How could it have come to be like this, I think, as I walked along its pristine shores?

The snow is really driving as I reach the eastern end of the beach, where a small thicket of towering spruce firs stand, waving in the whipping wind. I seek shelter in the pines, and ready my faithful Nikon for the walk back. With the snow and wind now at my back, I am able to shoot the beach, which looks truly magical in the snowstorm. Wispy strands of snow race across the sand and dance in the wind. The sky feels like it is falling on top of my head.

The clouds are getting lower and lower, and the snow is now encircling me like a giant white tornado. It is a strange but blissful study in solitude and serenity. The beach, as pure a portrait of nature could be, is taking on a frontal assault of snow, wind and driving rain. It can’t be more beautiful! 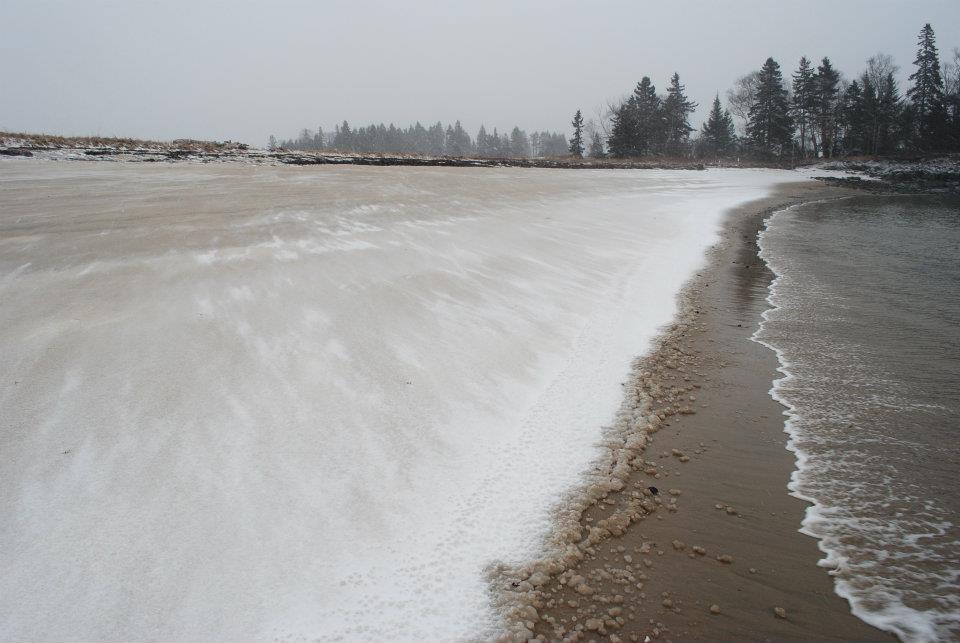 Photos of Between Two Rivers, a Snowy Spit of Downeast Sand