Rutherford Island, located eastward across the Damariscotta River from Boothbay, is better known by the names of its two harbors, South Bristol and Christmas Cove. Both are important and complex enough that NOAA has charted them to 1:10,000 scale instead of the normal coastal 1:40,000.

The central feature of Christmas Cove is the Coveside Marina and Restaurant which rents a dozen moorings that are so close to its deck and dining room that you can enjoy lunch or dinner with your own favorite boat in view. You’ll also see an old-school, summer-colony, small-boat culture in action, which emanates largely from the 112-year-old Christmas Cove Improvement Association. There’s not only a racing/day-sailing fleet of CC 21s (based on the classic Hodgdon 21) but also a remarkable number of well-kept lapstrake Lymans. The mooring was the most expensive I rented all season, though, and I still had to beg a waitress for a WiFi password.

But things change, something that’s quite evident at the Gamage Shipyard, whose history of noteworthy boatbuilding was followed by a stretch of hard times. Its huge, scary old boat shed was leveled this winter, which made the fine marina facilities Gamage has developed in recent years (with reasonable mooring and fuel prices) all the more obvious.

South Bristol is also friendly in terms of replenishment. A short walk starting with the popular Harborside Grocery & Grill and ending at the gourmet-level Island Grocery will reveal other eating opportunities that range from right-off-the-boat seafood at Osier’s Wharf Store (207-644-8500) to “The best Philly cheese steak in Maine” at Miss Ashley’s (207-644-8101).

The walk will also take you over the state’s busiest swing bridge (no laughing, please). If you dare take your boat through — mind you, this area is also called “The Gut,” and draft and mast height should be considered — you’ll find a protected pool that’s packed with fishing and pleasure craft. Moorings here are available from Bittersweet Landing Boatyard, which also offers a paved launching ramp. Of course, you can also approach the east side of South Bristol via Johns Bay, and when I do I look forward to visiting Witch Island, an eighteen-acre Maine Audubon preserve with two beaches.

It’s also quite pleasant to walk from one harbor to the other. The western route especially has notable river- and fixed-up-summer-home views. 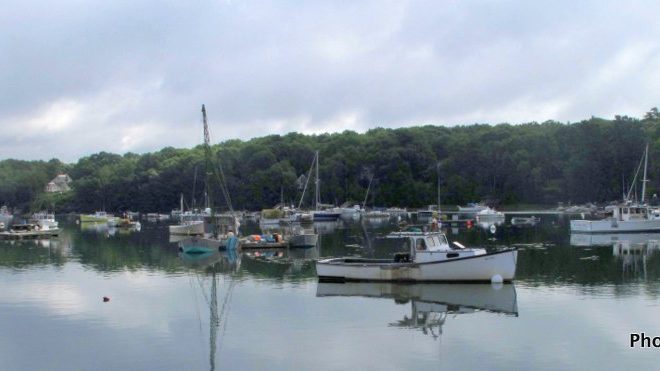