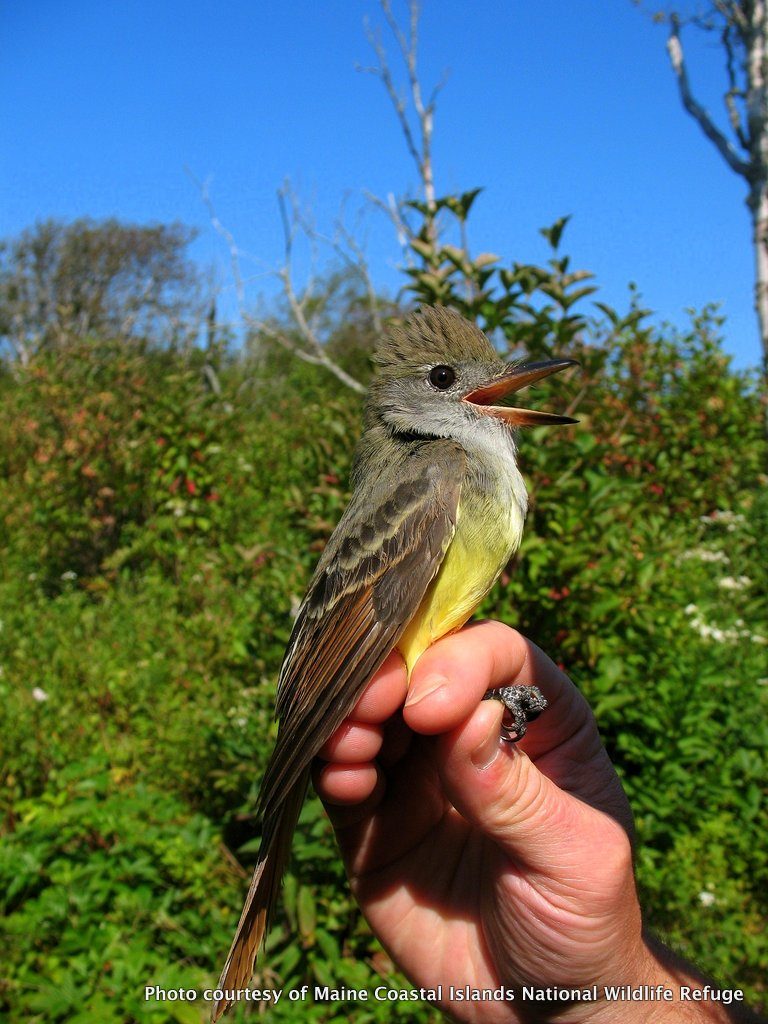 Here at the Petit Manan Point National Wildlife Refuge bird banding station we are very excited to have just begun our third season of migratory landbird monitoring. Since 2010 the station has banded over 5,000 individual birds of seventy-five different species, most of which are making their annual fall journey southward to warmer climates and more abundant food resources. The focus of this research is to glean as much information as we can from the birds — to describe demographic trends, inform habitat management decisions and to generally ‘take the pulse’ of the overall health of our landbird species. Though there are numerous monitoring methods available, banding provides managers, scientists and the public with specific information that can only come from a bird in the hand. For example, banding birds allows us to find out what age the individual is, what sex it is, and its physiological condition, among other things. As with any federally monitored research on wild animals, the safety of each bird is the most important factor, and to that end we minimize the handling of each individual to ensure they are released in a timely manner to go about their business.

This year we were able to start our banding effort on August 17 (a little earlier than in years past), and we were rewarded with a good number of flycatchers. Flycatchers typically depart the breeding grounds a little earlier than many species, as insect abundance starts to wane with the onset of fall. In the photos of the Traill’s Flycatcher and Great-crested Flycatcher, note the large, spade-shaped bills and ‘hairs’ at the sides of each (known as rictal bristles) which aid these birds in their high-speed aerial pursuit of insects. It is common to hear their bill loudly ‘snap’ shut when observing one actively flycatching, even from some distance.

Certainly the most common bird banded since the 17th was, appropriately enough, the Common Yellowthroat. These active little warblers are found throughout the continent, and typically associate with wet, shrubby or marshy habitat. Given the amount of both shrubby and wet habitat here at the point, it is no surprise to see so many of these! The photo of the Common Yellowthroat here is a male, evidenced by the black face mask which is absent in females.

Note the ‘pin’ feathers at the edge of the wing – this male is actively molting, and when completed he will be heading south to the tropics, or perhaps even a shorter distance to the southern U.S. Molt is required to renew the feathers as they wear-out over the year, and this is particularly true for a species like the yellowthroat that spends most of its time ‘skulking’ through thick vegetation.

An additional bonus for our early start has been the number of wood warblers that have yet to leave for greener pastures. Note the photo of a young male Northern Parula, with a fresh feather coat. Parulas are known to breed here at the point, and are fond of wet, coniferous-dominated woods.

Well, that is all for now, but stay tuned — migration is underway and we expect some incredible birds to grace us with their presence!

Photos of At Petit Manan Point, Seabirds Have Become Songbirds 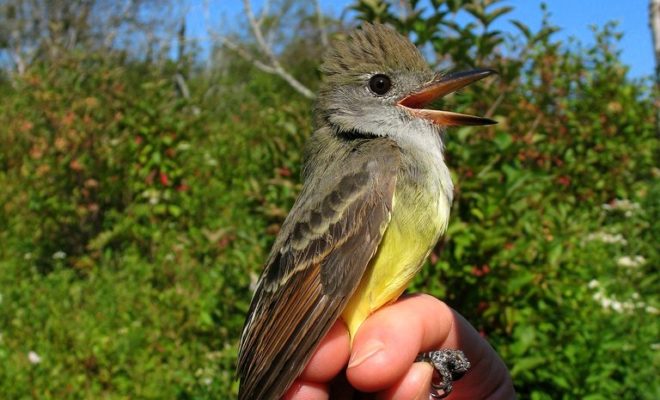