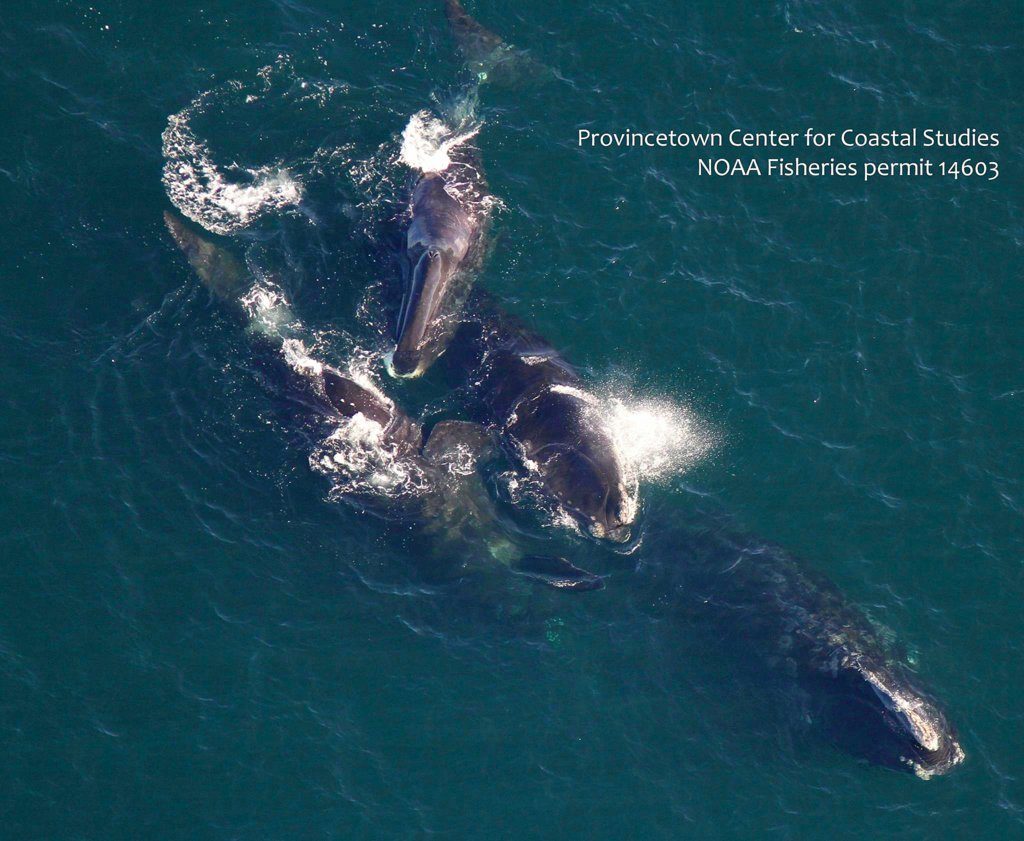 This view of a bowhead whale (at center top, with the smooth rostrum) is the first sighting of such a whale so far south.

Researchers at the Provincetown Center for Coastal Studies have observed a bowhead whale (Balaena mysticetus) off Cape Cod. This is the first time in recorded history that a bowhead has been seen so far south in the North Atlantic.

The bowhead was spotted in the waters east of Orleans by researchers from the Center’s Right Whale Population Program during an aerial survey in March 2012. The individual, a juvenile approximately 43 feet long, was engaged in social behavior with a group of mostly young North Atlantic right whales in a formation known as a Surface Active Group (SAG).

Not only is this the southern-most record of a bowhead whale in the North Atlantic, but it is also the first documented interaction between bowhead whales and right whales. Dr. Cynthia Tynan, a scientist at the Provincetown Center for Coastal Studies, is leading research efforts at the Center to examine the impacts of climate change on marine mammals.

Bowheads inhabit the Arctic Ocean and far northern reaches of the Atlantic and Pacific Oceans and are specifically adapted to life in the polar region. They have very thick blubber that provides both insulation and energy storage, and can remain underwater for up to thirty-five minutes, swimming long distances beneath the Arctic pack ice and using their immense skull to push up through sea ice to create breathing holes.

Like the right whale, bowheads are slow-moving filter feeders that subsist largely on zooplankton such as copepods. They are also protected under the Endangered Species Act and the Marine Mammal Protection Act.

Dr. Tynan notes that this southerly appearance of the bowhead whale coincided with a year of below average sea-ice extent in the Arctic. “Changes in the thickness and geographic extent of sea ice, and the availability of open water, affect the movement patterns of Arctic cetaceans. During February 2012, Arctic sea ice extent was the fifth lowest since 1979 and sea ice extent during spring was also below average. Sea ice conditions, combined with the anomalously warm winter and spring, suggest that impacts of climate change played a role in the unusual southern sighting of the bowhead.”

Last week researchers at the New England Aquarium reported seeing a bowhead whale in the Bay of Fundy and the whale has been seen twice since by other mariners in the area. Photographs of the whale were compared with images taken by the Provincetown Center for Coastal Studies and initial results indicate that it is the same bowhead whale.

Photos of Rare Sighting of Bowhead Whale Off Cape Cod 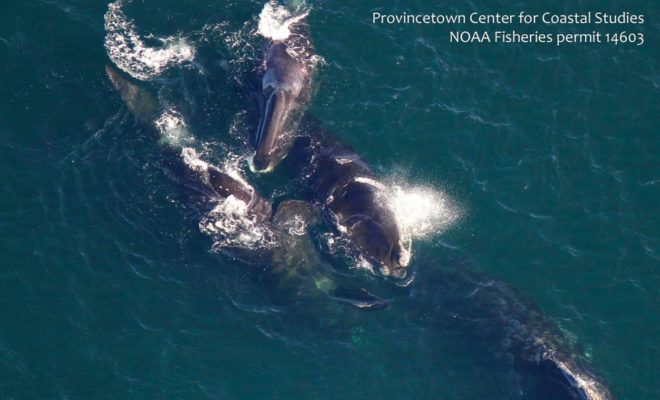 This view of a bowhead whale (at center top, with the smooth rostrum) is the first sighting of such a whale so far south.