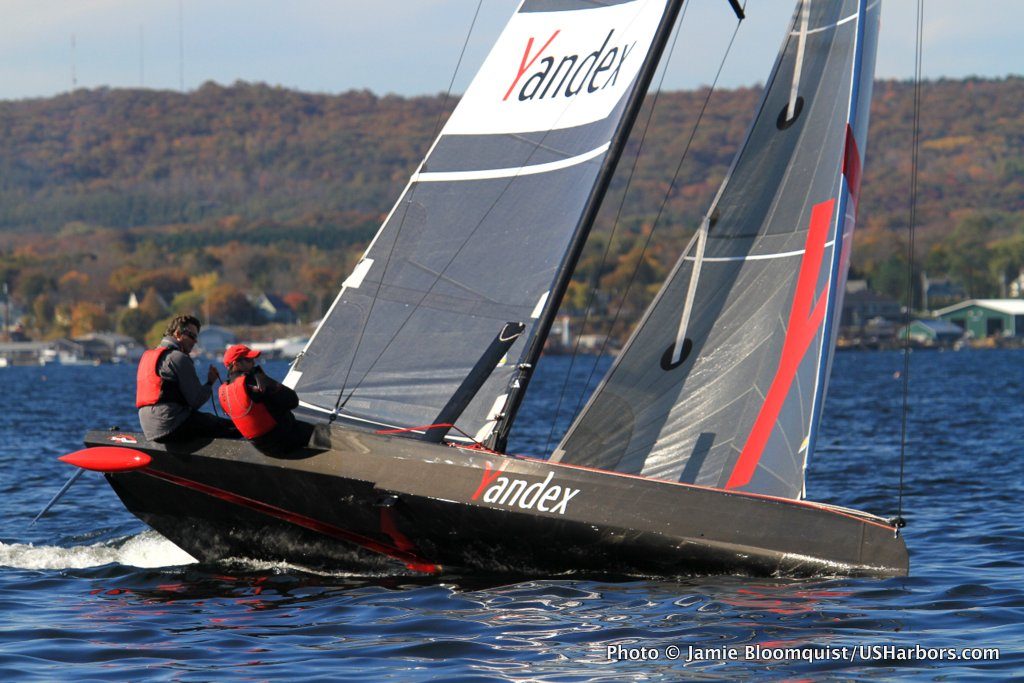 SPEEDDREAM, a prototype of what aims to be the world's fastest sailboat, reaches across Rockland Harbor. Note the bulb keel!

We saw Vlad Murnikov‘s drawings. We heard Cam Lewis was going to be skipper. We witnessed the build underway at Lyman-Morse Boatbuilding. But we didn’t know for sure if the Speed Dream racing project would ever really take off, or if it would be another yacht designer’s dream stuck on a drawing board or abandoned halfway through construction.

Over two days of testing in Rockland Harbor, Maine, we watched firsthand as the Speed Dream became reality. With a southerly wind blowing across Rockland Harbor at about 5 knots, the 27-footer, designed to be a prototype for a much larger model, sailed straight off the dock at Journey’s End Marina on the yacht’s first official test sail. With Lewis on the tiller and two crew from Lyman-Morse aboard, Speed Dream made its way past the granite wharfs and Coast Guard station before tacking and heading out into Rockland Harbor. Even in such light conditions, the jet-black, carbon-fiber creation appeared to easily be hitting seven or eight knots.

“Does it look like you expected it to?” I asked Murnikov.

“Eh, pretty much,” the bearded Russian designer responded with a shrug. Hardly the enthusiastic response I might’ve expected from someone who has spent the past several years pursuing this dream. But Murnikov’s plan is simple: to create a monohull that will destroy every sailing record in existence. He aims to accomplish that through a radical “delta-shaped” hull design and a canting keel, the bulb of which actually clears the surface of the water when the yacht is at top speed. Once the drag on the keel is removed from the equation, Murnikov says, and with daggerboards to keep the yacht on track, the unique hull shape should allow Speed Dream to plane easily. Boat speeds could become staggering very quickly.

On the first day of testing, Lewis’ first port tack took him deep into the Rockland mooring field, now practically empty as most Maine yachtsmen have by now hauled or headed south for the winter. All indications were that Murnikov’s design was working according to plan. Another tack onto starboard and the crew looked to be settling in for quite a ride.

Soon, as the breeze built and Speed Dream noticeably powered up, we hoped to see the bulb pop through the surface. But, instead, along with the powering-up came the slow-motion pitch to leeward that dinghy sailors know too well. Lewis and his crew’s attempts to scamper to windward across the angled carbon fiber were futile. Within a matter of seconds, Speed Dream was on its side, Robbie Doyle’s beautiful sails settling limply onto the water as Lewis and the rest of the crew tried to scamper onto the daggerboard.

Tests, by their very nature, don’t always go according to plan.

The good news is that righting a yacht like Speed Dream can be a relatively simple affair, provided that the boat isn’t allowed to turtle. Some quick work by Lewis’ wife, Gretchen, who was driving the chase RIB, kept the masthead afloat. Within a matter of minutes the breeze was under the sail. A few bounces by Lyman-Morse’s Steve Tofield on the daggerboard, and Speed Dream was upright again. (According to Murnikov, the capsize occurred when the cordage controlling the canting keel snapped, sending the bulb suddenly to leeward.)

Though the drama was over, Speed Dream’s ability to continue sailing effectively had disappeared along with the crew’s ability to control the keel. Sails were furled, repair crews consulted, and the inaugural sail was over. Although Murnikov and the rest of the crew were clearly disappointed, even just a few minutes under sail had proven the most basic elements of yacht design — the ability to travel in a straight line, against the wind, and at speed. Tomorrow, a new keel-control line would be installed and more test sails would resume. During those tests, the bulb keel was successfully lifted clear of the water, though again a mechanical failure cut the day’s sailing short. (Crews are already re-evaluating the entire canting mechanism.)

The dream had become reality.

For a short video of Speed Dream sailing, click here. 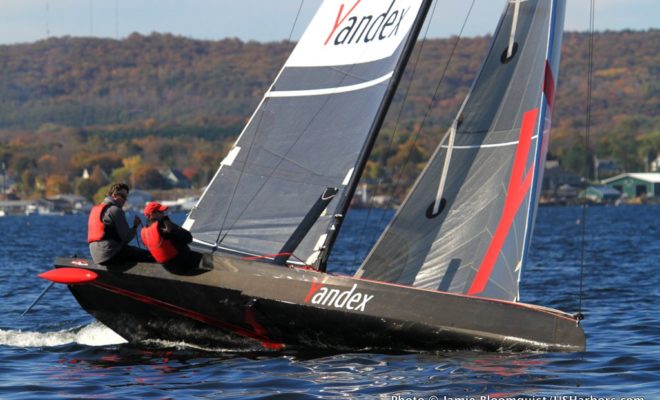 SPEEDDREAM, a prototype of what aims to be the world's fastest sailboat, reaches across Rockland Harbor. Note the bulb keel!