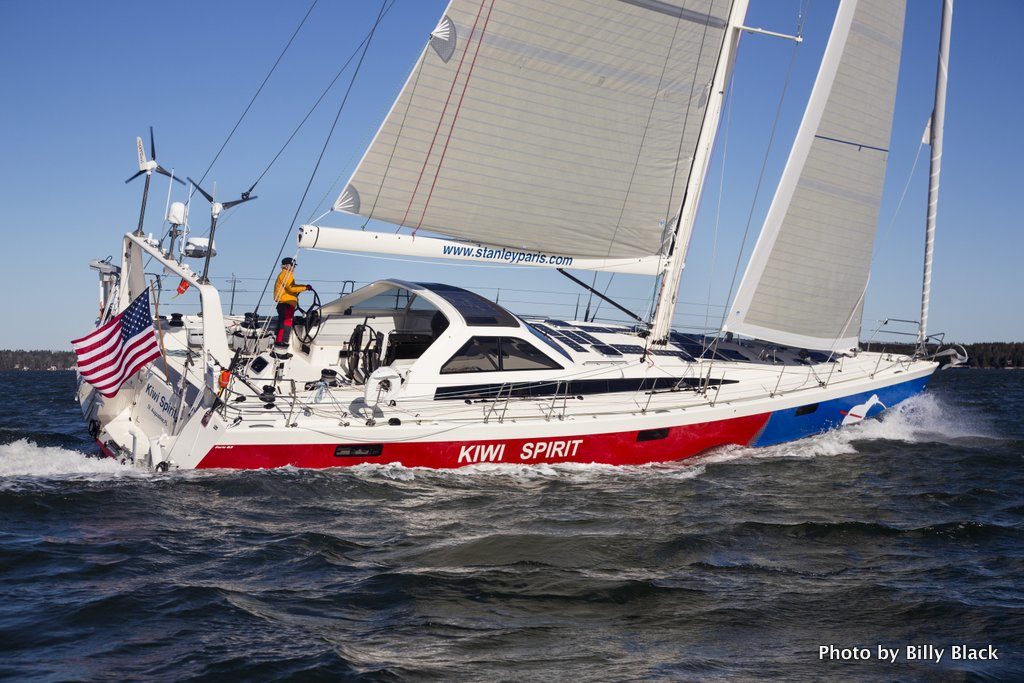 Following a busy two weeks of sea trials and tweaking the newborn Paris-63 yacht Kiwi Spirit in Thomaston, Dr. Stanley Paris took the helm Saturday, November 17, for his maiden ocean voyage on the sleek, Farr-designed and Lyman-Morse-built, yacht. Accompanied by crew, Paris will sail to Newport, Rhode Island, before heading off to Bermuda and ultimately Antigua.

“It’s a bit like a baby leaving the cradle,” said Paris. “I’ve spent a great deal of time here in Maine as Kiwi Spirit went from the drawing board to the water. I’ve been very hands-on in the process and the team at Lyman-Morse has been terrific in building an incredible yacht and customizing it for my goal to sail solo, non-stop, unassisted and totally green around the world.”

Paris will train for the next twelve months aboard Kiwi Spirit readying himself for the circumnavigation, which he will tackle at the ripe age of 76. He intends to compete in a variety of racing events, including the Caribbean 600, Charleston to Bermuda, Bermuda 1-2, and Marblehead to Halifax regatta, in addition to deliveries and other sail training. The daunting task of sailing 27,000 miles alone around the globe will require specific experience in sleep deprivation, sail handling, electronics, satellite communication, and navigation. Paris aims to best the benchmark set by Dodge Morgan in 1986 when he sailed the cruising yacht American Promise around the world from Bermuda to Bermuda in 150 days. Paris intends to be the oldest person to ever circumnavigate the globe alone under sail, non-stop, unassisted, and completely green.

“I have always been inspired by the efforts of others both in sports and in my professional career and have sought to emulate and, where appropriate, improve upon what they have done,” added Paris. “For me it is about following in the footsteps of heroes, and Dodge Morgan is one of those.”

Paris also intends for his solo circle of the globe to be entirely green; no hydrocarbons will be used whatsoever. No gas, propane or butane will be aboard during the circumnavigation. Solar panels line the deck and small hydro generators are mounted under the vessel to bring power back to the boat. If he succeeds, Paris will become the first person to ever circumnavigate the globe non-stop using no hydrocarbons.

No stranger to endurance events, Paris swam the English Channel twice and racked up some 60,000 miles sailing. He also completed the Ironman World Championship triathlon in Hawaii. This year alone, his adventurous spirit sent him racing a motorbike across the U.S. in less than 50 hours coast to coast and completing a half-marathon.

Unlike most sailing endeavors today which consistently seek commercial sponsorship and goodwill donations, Paris will complete his mission in the Corinthian spirit of sailing. Instead of seeking funds to execute his mission, he will fund the entire project personally and ask those interested to support his favorite charity, the Foundation for Physical Therapy. Individuals and companies are able to place their name onboard Kiwi Spirit for a small donation, which goes directly to the non-profit organization.

The hull of Kiwi Spirit is built out of epoxy-infused carbon, E-glass and Kevlar with a thermo-core that is both stiff and lightweight. There is a hydraulic lifting keel which draws 14 feet, nine inches (down) for excellent upwind performance and eight feet, seven inches when the keel is up. There are four water ballast compartments to help counter the powerful rig and make the boat more comfortable in heavy air. An easy-to-manage sail plan has been incorporated, with all lines leading aft to the cockpit.

Photos of Kiwi Spirit Sets Off On Ocean Quest 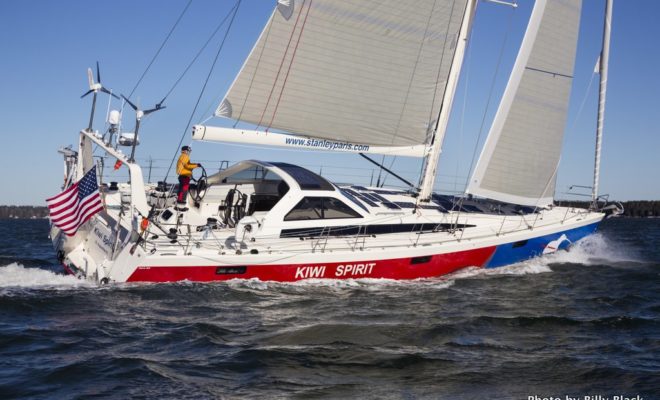