For Keeper Stripers, Get a Boat and Head Offshore

Recently I’ve mentioned how poor shore fishing is right now, especially in the upper and mid-Bay. The oceanfront, too, is not fishing well from shore for larger fish. I got out late last week and landed several small ones, but we are talking very small fish of about 12 inches. I spoke with a couple of guys and they were complaining about the lack of larger fish around.

However, if you check out the boating reports, they are glowing with accounts of large fish. It’s true. My brother Steve and my son Ben were out at Block Island on June 20 in Steve’s boat with a fleet of other boats. There the keepers are plentiful (see the photos of two of them that they landed) and there are some real monsters being caught. We’re talking a number of 50s and even 60s taken last week. Many fishermen are also reporting good catches of large stripers in the mid- and lower-Bay. Many of these large fish are in deep water and they are falling for bait. Pick your offering — eels, live menhaden, chunks, yo-yoing menhaden, scup, etc. — all are getting the job done from the boat.

Most shore guys prefer to plug rather than fish with bait. Those guys are finding the large fish hard to find because they are not close to shore. Many of these fish moved off into deeper water when we had the flooding rains of the last couple of weeks. You might get lucky, though, and have a school of menhaden hit the shoreline where you are fishing. If you can snag one of these large baitfish, you have a shot at catching something big.

But there are signs of hope for shore fishermen. That tea or coffee color brought on by the heavy rains and floods of the last two weeks is clearing and water quality seems back to normal in the upper- and mid-Bay locations. The lack of rain recently and the exceptionally high tides have contributed to improve things. That’s the good news.

The bad news is that the fishing has only slightly improved. I got out during the evenings on June 21-22 in the upper Bay and landed four schoolies from shore on bucktail jigs and plastics on jigheads. The biggest fish might have gone 22 inches. I have seen very few boats around, so I suspect the pogies have moved out of the upper Bay as they often do in late June. I’ve run into a few guys fishing, and all are complaining about the lack of fish in the Bay for shore fishermen.

In recent years, the Bay fishing has taken a nosedive in late June. At this time of the year stripers and blues exit the upper Bay waters and move toward the cooler waters in the lower Bay and along the deep water drops along the oceanfront. Unfortunately, I’m not hearing any better fishing reports from shore guys in those locations either. Ho hum, summer fishing has arrived in RI. The next two months will be tough. 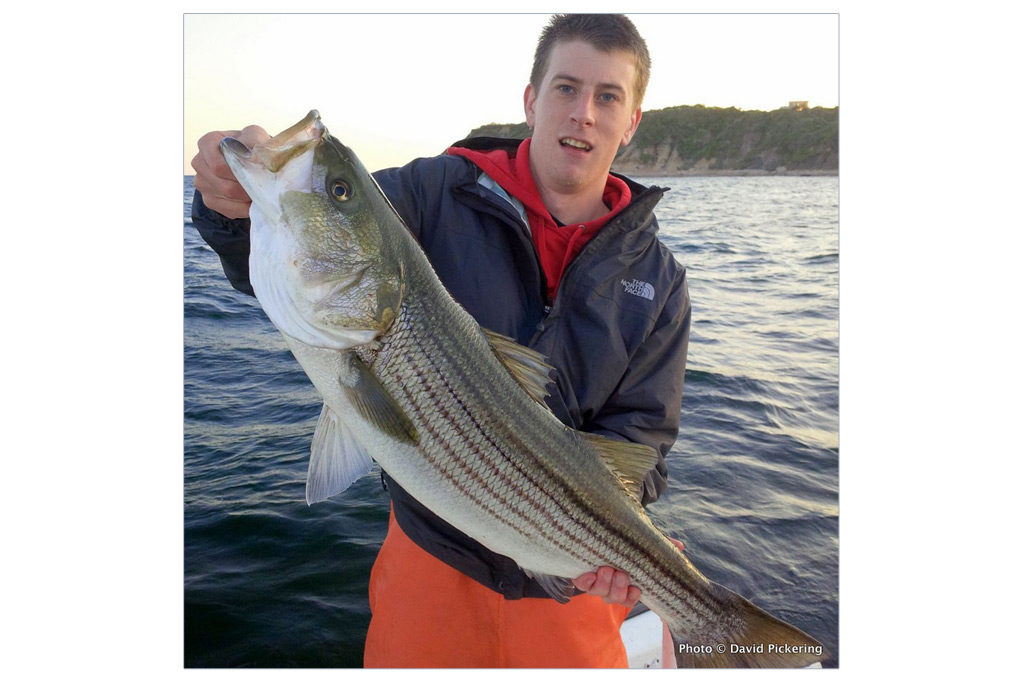 My son Ben with a nice keeper striper that he landed off Block Island.

Photos of For Keeper Stripers, Get a Boat and Head Offshore 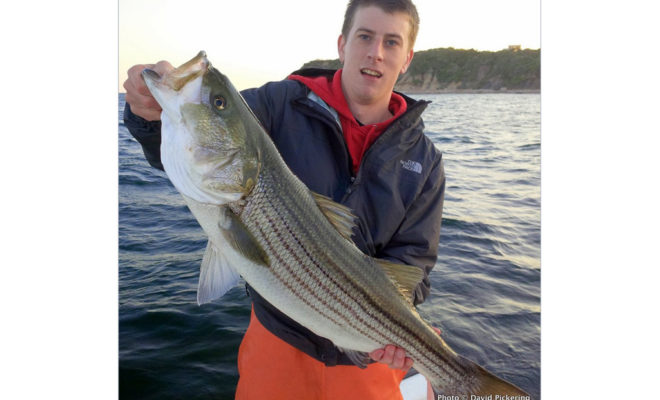 My son Ben with a nice keeper striper that he landed off Block Island.