Launched: Back Cove’s Downeast 37 Is Built for Fun

If you’re someone who thinks that boats seem like too much work and not enough play, you better take a look at the Downeast 37. Practically every aspect of this, the newest yacht to come off the line at Back Cove Yachts in Rockland, is designed with only one thing in mind: having fun.

Unveiled to the public and the press during a christening ceremony in Portland on July 11, the Downeast 37 presents an entirely new offering for Back Cove customers — the luxury dayboat. Though the new yacht includes a pleasant owner’s stateroom forward with all the comforts one might require for a weekend or weeks aboard, the real action on the Downeast 37 takes place in the space from the helm station/companionway and extending aft to the huge swim platform. This massive area — we didn’t measure it, but the outdoor portion alone is twelve feet by twelve feet, plus the enclosed cabin space — exists on a single level, creating an indoor/outdoor “great room” for a variety of purposes. And if the sun gets too strong or afternoon showers crop up, the entire space can be covered with the flip of a switch, as the standard SureShade extends from the hard top to cover the entire aft deck. “The ideas that drive the Downeast 37 design are very simple: Stop-you-in-your-tracks prettiness and the biggest, most flexible exterior spaces available on a boat this size – period,” says Kevin Burns, vice president of Design and Product Development at Back Cove and Sabre yachts.

Other details aboard the Downeast 37 are no less remarkable, from the Back Cove standard corner exhaust to the Stidd helm chair and the Herreshoff interior. And while it almost seems contradictory to discuss the mechanical systems on such a fun-focused yacht, the propulsion and steering systems are critical to keeping a day on the bay pleasurable. The Downeast 37 comes standard with 480 horsepower Cummins engines that pushes the yacht at 20 knots with a top speed of 25 knots. A joystick-controlled bow thruster makes navigating simple, and Back Cove even offers an upgrade to the “Easy-Dock” system that removes all guesswork from a wharfside landing. Again, the focus is on fun.

All those details are contained in a floating package that will delight everyone aboard, including Ed and Janet Miller, owners of Hull No. 1, as well as those ashore and nearby. “For lovers of traditional work boat styles, the Back Cove Downeast 37 says ‘lobster,'” says Bentley Collins, vice president of sales and marketing for Back Cove and Sabre yachts. “And for our friends from the Chesapeake, she says ‘Deadrise.’ No matter where you do your boating, this boat has a look that will turn heads in any harbor that she enters.” 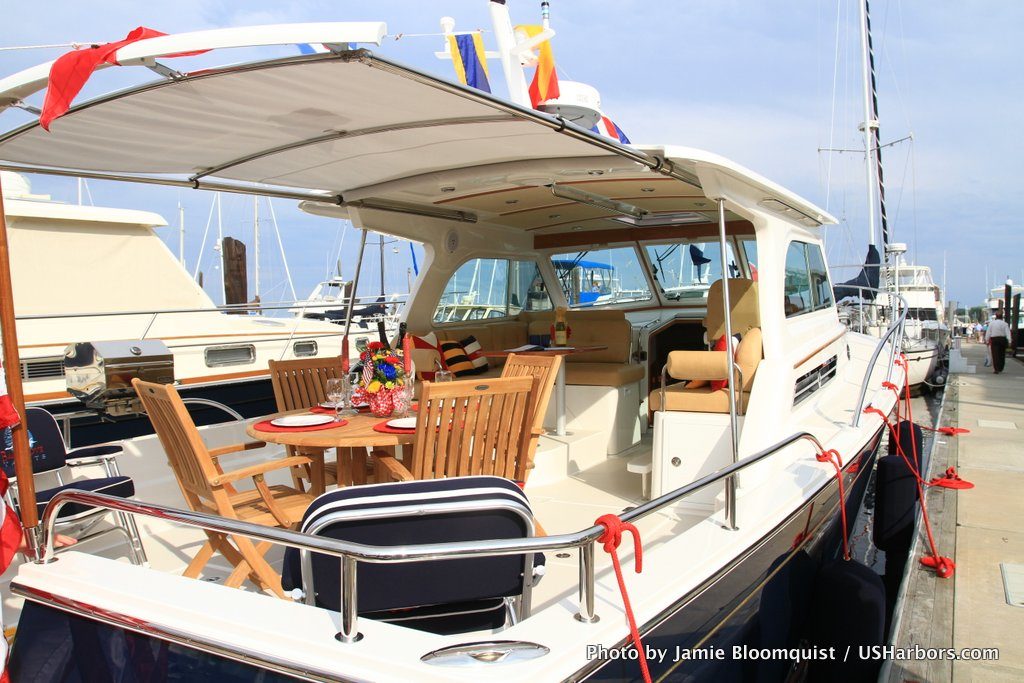 The sprawling aft deck on the new Downeast 37 practically begs for you to pull up a chair and relax.

Photos of Launched: Back Cove’s Downeast 37 Is Built for Fun 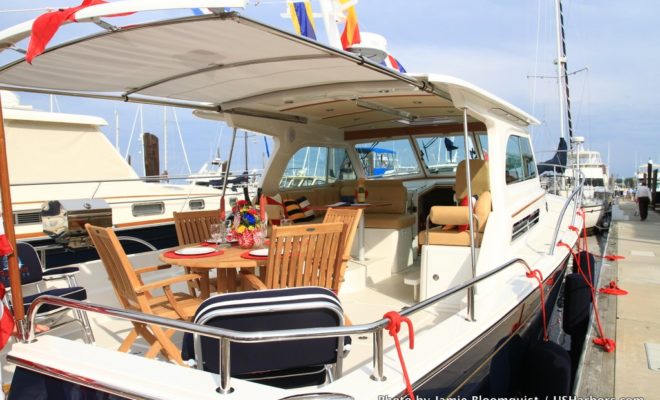 The sprawling aft deck on the new Downeast 37 practically begs for you to pull up a chair and relax.