The steamboat Sabino has been sitting quietly at her berth in the Shipyard for the past year while some key parts of her propulsion system were being fabricated, notably the boiler and the fresh water tank. The boat’s pilothouse, canopy, and stack, remained on shore for preservation work, which left her looking somewhat abbreviated as nothing was present above the upper deck.
That all finally changed as the new boiler was ready to be installed and a the new water tank arrived. With the help of a crane, Wednesday, June 14, was a day for a lot of progress in the Shipyard’s work to complete the restoration and prepare Sabino to return to operation next month.
The first task was to adjust the position of the new water tank placed aboard last week. The tank provides water to the boiler to make steam. This tank, newly fabricated, is smaller than the previous tank. It was determined, based on the way the Museum operates Sabino, that she did not need to carry as much water as she had been doing in the past. The result is a savings of weight and space in the bow where the tank sits below the main deck.
Next up was the boiler which was lifted and temporarily placed in position on its concrete base. The boiler actually sits on four metal brackets on the base which needed to be lag-bolted through the concrete and into the locust bed logs below. The crane lowered the boiler into position while the shipwrights carefully located the brackets. Once the engineer was satisfied with the alignment, the crew scribed spots for the holes to be drilled for the bolts. The boiler was then lifted out, the holes drilled, and the brackets were bolted down. The boiler was then lowered back into position for the last time and settled on the brackets.
The pilothouse was then rigged up and lifted off the dock and onto the upper deck. With a few minutes of back-and-forth nudging to get the positioning just right, the house was lowered completely and bolted into place.
Sabino now looks much more like a proper steamboat. The engine and canopy were installed on Friday, June 16. With the installation of the stack, Sabino will be whole once again.
Sabino‘s first official cruise will be to lead the parade of boats down the Mystic River during the Museum’s Antique & Classic Boat rendezvous July 23. She will return to regular operation beginning August 1, with one 30-minute cruise to start each day followed by two downriver cruises. The boat will also be available for private group charters. For more info visit https://www.mysticseaport.org/. 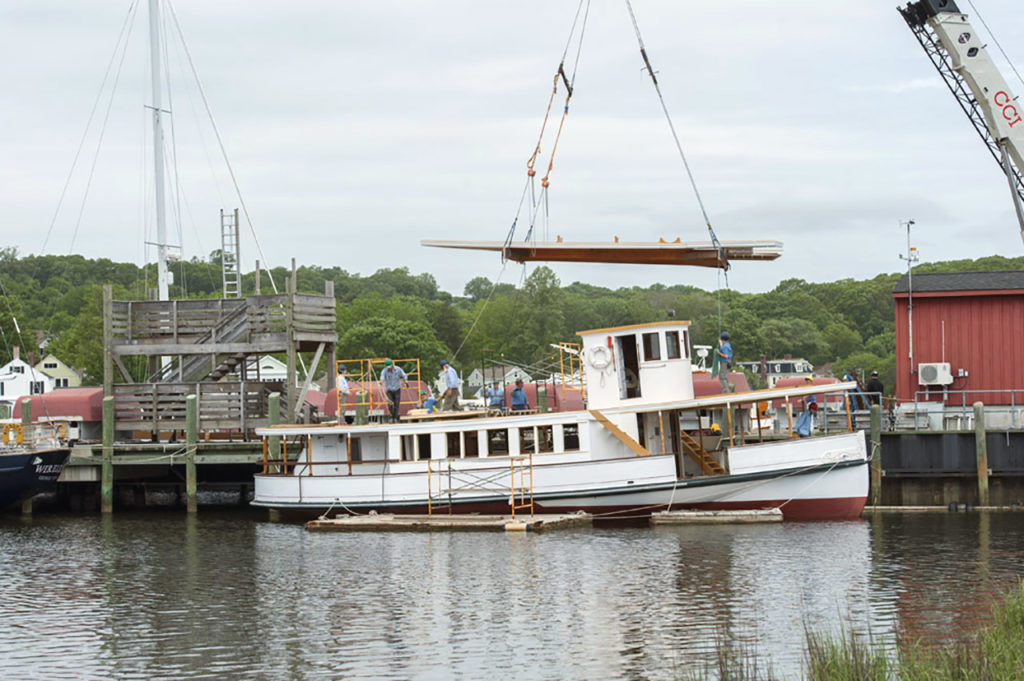 Sabino in the water

Photos of Meet the steamboat SABINO 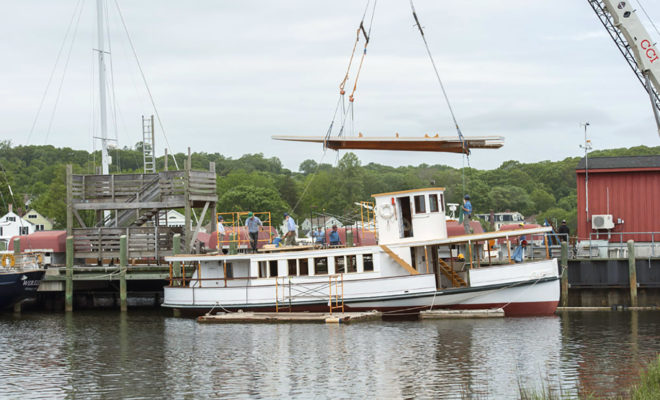 Sabino in the water 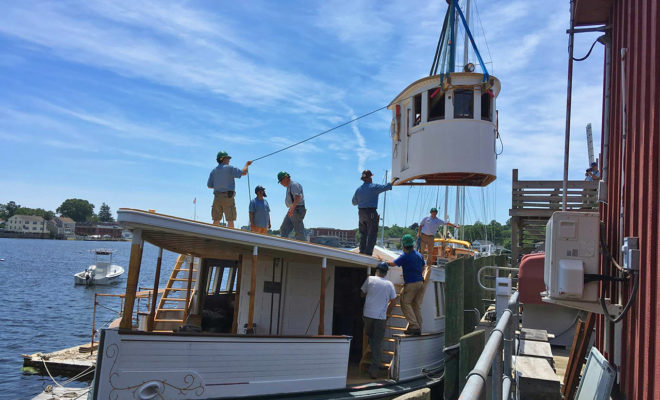 The pilot house goes on