The following poem penned by Elmenia P. Lurvey, wife of Wood Island lightkeeper W. F. Lurvey (1917-1923) so beautifully describes the life of lighthouse keeping. The poem appeared in the Bar Harbor Times on February 14, 1923. To learn more about the American Lighthouse Foundation’s mission and work saving our historic lighthouses and how you can visit them today go to: www.lighthousefoundation.org

Lines from a Lighthouse…

I am sitting beside this billowy ocean,
And gazing on naught, but the sea and the sky;
The crystal waves roll with an unceasing motion,
As they rush on the sea shore, in foam breaking high.

We three are alone on this desolate island:
Alone with my husband and Wilbert, his son.
He is lightkeeper here on the Wood Island Light Station,
When daylight is ended his work is undone.

For, when nearly sundown, he ascends the high tower,
He lights the big lantern that gleams through the night;
For the sea-faring sailors, roaming over the ocean,
Who patiently watch for the red beacon light.

When the clock points to midnight, he again mounts the tower,
To wind the machinery revolving the light.
He carefully watches till its beams shine forth brightly,
Then wakefully slumbers through the rest of the night.

At the dawning of sunrise he starts for the tower,
To put out the light, tidy up for the day.
There’s enough work to do to keep things running smoothly,
It is work while the day lasts, not much time for play.

More especially now, since the burning of soft coal,
Keeping everything covered with black, smutty dust;
It is useless to growl at the U.S.A. government,
But shovel the coal and in Uncle Sam trust.

Both outside and inside the tower must be painted,
The stairs painted too, winding up to the light;
The dwelling inside must be painted and varnished,
Outside every building is all painted white.

In sea fog and snowstorms he enters the tower,
To mind the big weight so the clock may run well;
For the benefit of seamen approaching the harbor,
Who anxiously listen for the sound of its bell.

Photos of Wood Island Lighthouse Poem by a Keeper’s Wife 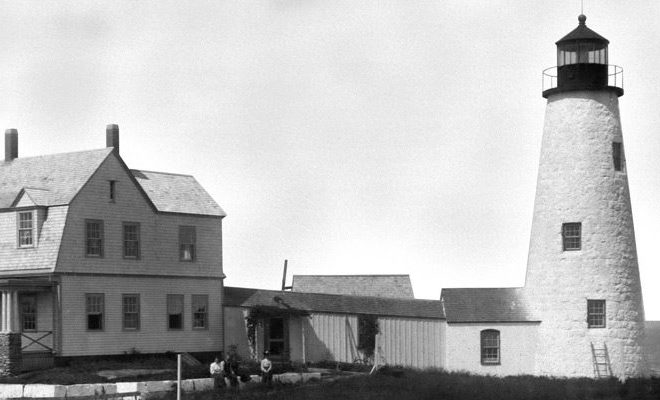