NEWPORT, R.I. (August 19, 2018) – With its largest fleet ever, the 14th edition of the Ida Lewis Distance Race started Friday (August 17) at lunchtime south of Rose Island (in Narragansett Bay’s East Passage) and saw its first of 47 teams finish off Ida Lewis Yacht Club (in Newport Harbor) shortly after 2:40 a.m. on Saturday.

Taking the early morning line honors was PHRF Spinnaker Division’s Class A and Overall winner Brian Cunha with his Newport team aboard the Ker 55 Irie, while finishing next at 3:30 a.m. was the modified Volvo 70 Warrior, the event’s largest entry co-skippered by Louisiana’s Stephen Murray, Sr. and his son Stephen, Jr. in IRC Class.

With 12 other entries in IRC, Warrior had sailed the 169 nautical mile “Montauk Course” past Point Judith to Buzzards Bay Tower and then past Block Island to a mark off Montauk Point before partially retracing the course for a final lap back around Block Island and home. Despite Warrior’s early finish, however, the team fell to third after IRC handicap ratings were applied, and it was the TP52 Spookie, owned by Jamestown, R.I.’s (also Norwalk, Conn.) Steve Benjamin and co-skippered by Bermuda’s Mark Watson, that prevailed as class winner.Spookie took 15 hours and 42 minutes to complete the course compared to Warrior’s 14 hours. (Second overall in the class was Privateer, the Cookson 50 owned by Ron O’Hanley of Boston, finishing in just under 17 hours.)

According to Spookie’s Watson, who was ably assisted by a 13-man crew that included America’s Cup veterans Ben Lamb, Ken Read and Peter Bromby in the afterguard, getting a good start in Saturday afternoon’s 10-12 knot breezes gave Spookie a leg up. “Some people say in distance races you just need to keep clear at the start and get going,” said Watson, “but in this case establishing our lane at the start set us up for staying in the current and breeze on the Jamestown side of the course as we were heading out of the Bay.”

Compared to last year’s challengingly high winds, driving rain and thunderstorms, this year’s race offered moderate winds throughout and a passing rain storm, more consistent with the conditions that have made this race a perennial favorite. “We had big sails up the whole way around,” said Watson. “It was relatively easy with the exception of going past Block Island (on the south side) the first time. The current was just ripping, and between Block Island and Montauk where the turning mark was, there was a 10 degree difference between our course over ground and our compass heading.” Watson, an Ida Lewis Distance Race first-timer, said he has always wanted to do this event, and now he is a proponent of it. “It’s a good track and a nice distance: short enough that you can go all out, but also long enough that you have to pace yourself.”

A shorter 121 nm “Point Judith Course” was set for all other classes, which included two for PHRF Spinnaker (with a total of 27 boats starting together on one line) and one each for Cruising Spinnaker (four boats) and Doublehanded (three boats). The Point Judith Course went to Block Island only once and couldn’t have been more satisfying for Brian Cunha’s team, which counts this as their fourth consecutive win here.

“What’s interesting is that we got squeezed out at the start, but it actually helped us,” said Cunha, who like Spookie’s skipper wanted to be on the Jamestown shore and was able to easily get there after starting well behind the fleet and immediately splitting tacks with the fleet. “We were fast as hell going upwind, averaging 9.1 knots the entire 27 miles to Montauk, and then we cleared Block Island without having to tack like the other boats. That’s mostly where we saved our time and won the race.”

Barrington’s Bob Manchester, who has sailed in the event six other times but has never won, started prematurely on the crowded PHRF starting line with his J/120 Vamoose but restarted and persevered to win PHRF B. “They were good conditions for my boat,” he said.

David Southwell, of Chestnut Hill, Mass., sailed with Stuart Macneil to top the Doublehanded Class with his J/121 Alchemy, and Andy Burton of Middletown skippered his Baltic 40 Masquerade to victory in the Cruising Spinnaker class.

“It was tiring but tons of fun,” Burton said, noting that Masquerade is a new acquisition and this is the first time he has skippered it in this race. “We were hard on the breeze to Point Judith; then it was a spinnaker reach to Buzzard’s Bay Tower before a fetch to Block Island. There were lots of corners to go around, so on things like spinnaker hoists and douses everyone was on deck.”

Winning the Arent H. Kits van Heyningen Trophy for the Youth Challenge in IRC wasDreamcatcher, a Swan 48 with members of Mystic, Connecticut’s Mudratz Offshore Program aboard. In PHRF, the trophy was awarded to the J/105 Young American YCC, with members of the Young American Sailing Academy of Rye, N.Y. aboard.

“This was my first overnight race, and Friday was my 16th birthday,” said Lily Flack of Stonington, Conn., who sailed with the Mudratz. “I had an awesome time and learned a ton. My favorite part was driving upwind at night time.” 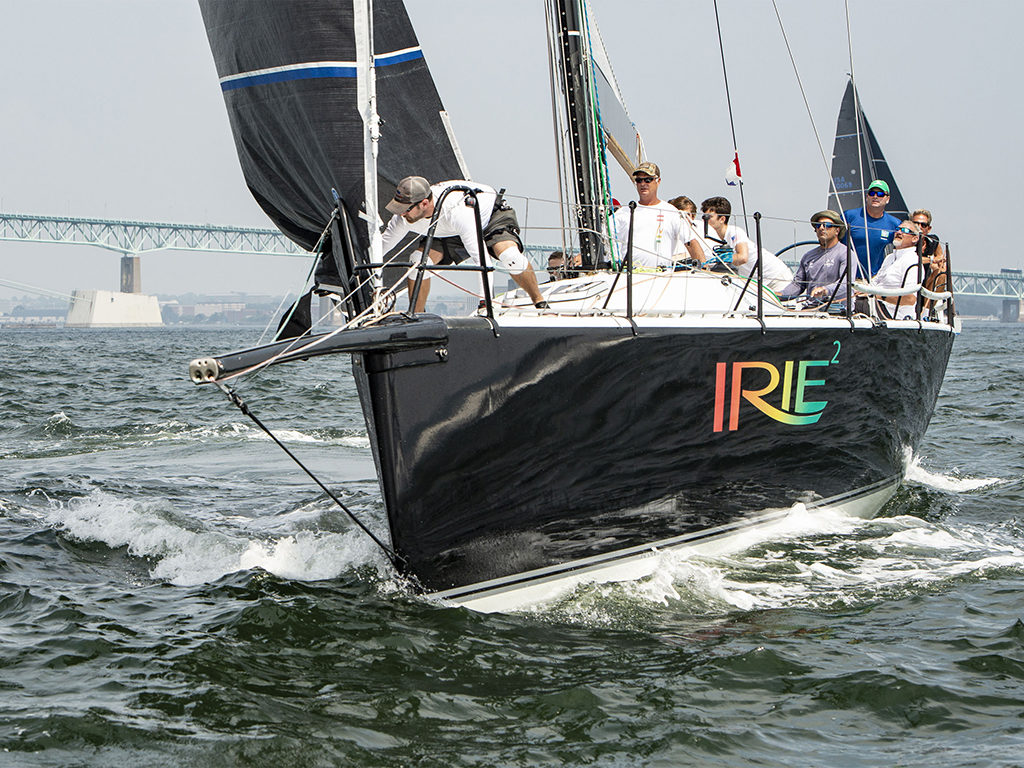 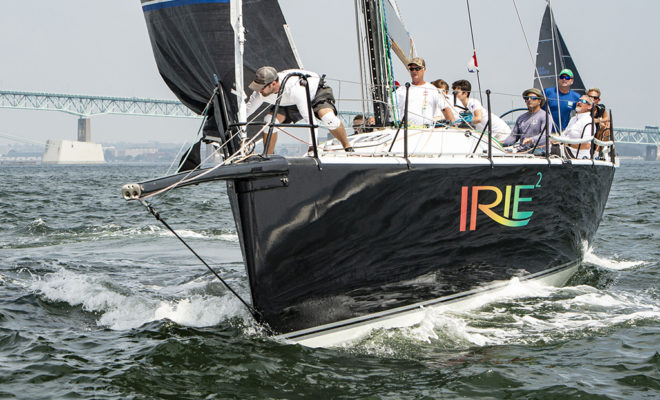 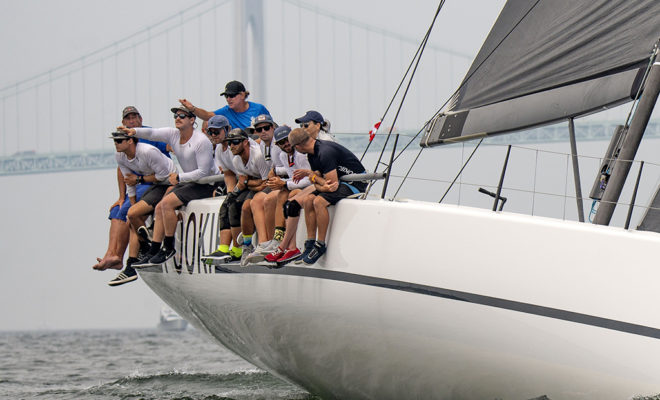 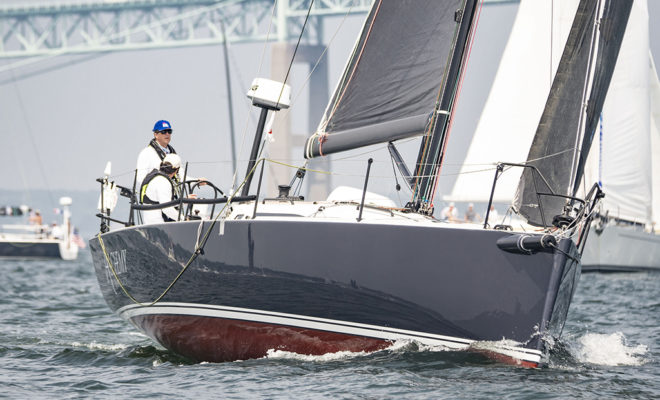 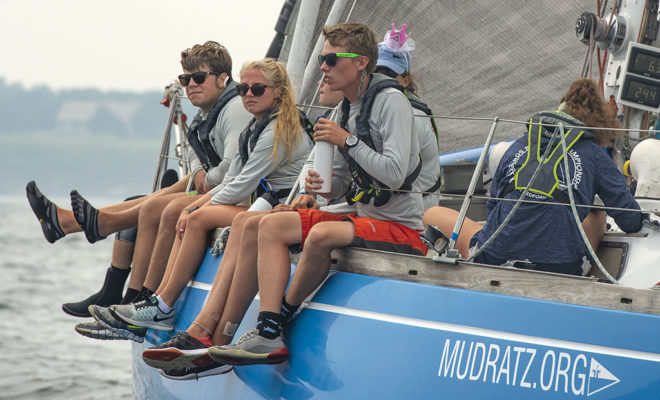 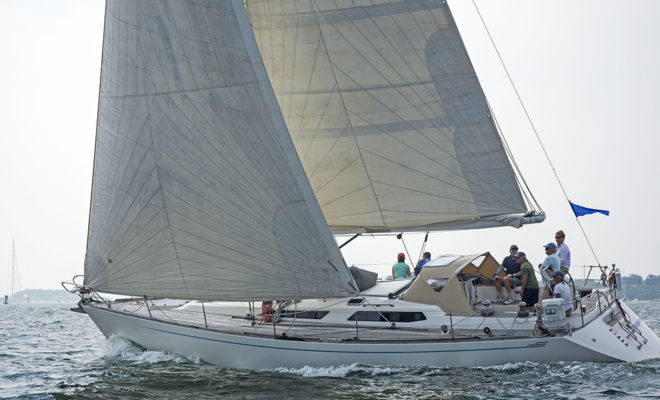 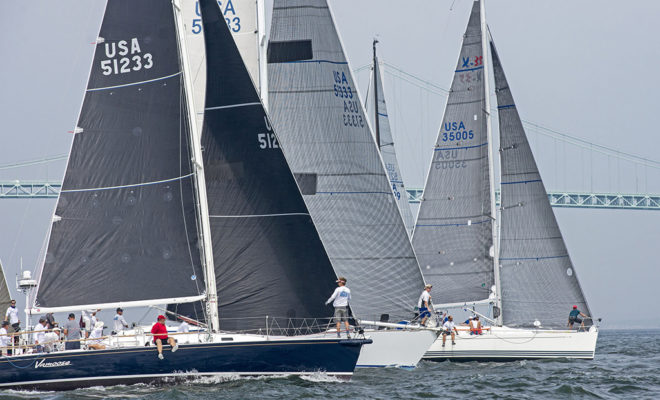 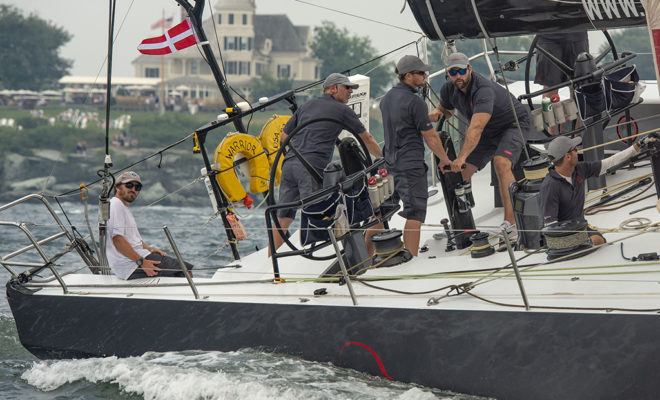 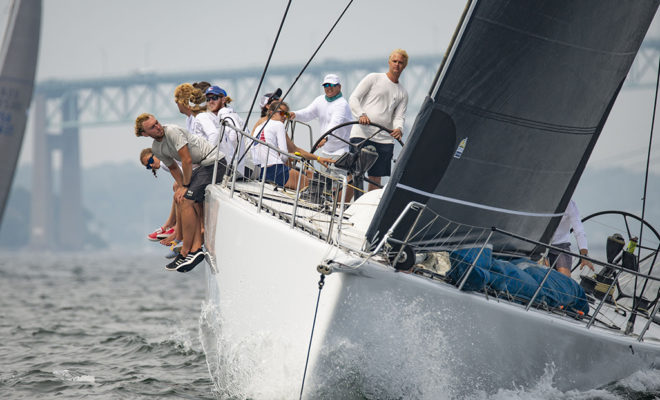