The Antique & Classic Boat Festival is featured by Yankee Magazine this summer as its “favorite event” in all of Massachusetts! This is the Festival’s 36th year. It was founded in Boston in 1983 to celebrate that historic port and has since moved to another historic port – Salem, Massachusetts. The public will have a chance to view more than forty vintage sail, power and hand-powered craft over the August 25-26 weekend at Hawthorne Cove Marina. A number of owners invite the public aboard their vessel and regale them with tales of how they acquired their boat, remarkable voyages and the joys and woes of restoring her! According to Pat Wells, Festival Coordinator, “ Boat owners learn, too, from the public. Some may have known their boat in the past and can fill in some history. One spectator told a skipper that she had seen his boat launched in 1935 and had spent her honeymoon aboard her! “

Some boats come in big sizes, others are small, but all are interesting, and stars in their unique way. Among the oldest boats to be seen at the Festival is BACLAJU, a 100 year old Duxbury catboat. Recently restored by the Jones River Village Historical Society, she was designed and built by George Shiverick, a renowned shipwright in Kingston, Massachusetts from the late 19th century to 1940. He is said to have built upwards of 232 vessels including a sloop for Franklin D. Roosevelt and the entire fleet of the Duxbury Yacht Club.

Also to be seen is UDFORSK HAVENE, a replica of the 25’ trans-Atlantic sailing dory CENTENNIAL that reportedly made the world’s first recorded single-handed crossing of the Atlantic in 1876. Sailed by a Danish-born Gloucester fisherman, Alfred Johnson, she made the voyage to Liverpool in 66 days. The replica was built by owner Daniel Noyes of Newbury, Massachusetts.

Not to be missed is the wooden cutter SERAFFYN OF VICTORIA, a celebrity among boats. Only 24 ft. long, she was sailed around the world without a motor by owners, authors Larry and Lin Pardey, who chronicled the journey in books and articles. More recently, current owner, George Dow, has sailed her from Hingham, Massachusetts to at least eight Festivals! She is being honored with this year’s Festival Burgee which can be seen flying from the masts of the fleet.

Also on hand will be the fascinating vessel POLARIS, a replica based upon the famous archeological find of a 38’ Viking ship purported to have been built around 1030 AD in Norway. She is being brought to the Festival by Stuart Boyd of Beverly and is said to accommodate up to fourteen rowers as well as sailing with her 25m2 square sail.

Following the Scandinavian tradition, Ryan Flynn of Rockport is bringing his Bindal Faering Nordland boat KANIN, named after the Norse god of “cute and fluffy rabbits.” Story has it she was bought in Norway by a member of the Rockefeller family. This is a remarkable looking hand-crafted vessel. Her oarlocks were hand carved from bent tree branches.

Boats aren’t the only highlight. Festival-goers can also enjoy a crafts market,

children’s activities, boat rides and live music throughout the weekend. Returning is Festival favorite New New Orleans Jazz Band who are New England’s original Preservation Hall Jazz Band. Members are in their 7th, 8th and 9th decades! Also back will be Michael “Toby” Tobas with his steel drums and infectious calypso, setting up a refrain of “They’re dancing on the dock! Dancing on the dock!”

(Readers may visit the Festival website at boatfestival.org for particulars.) 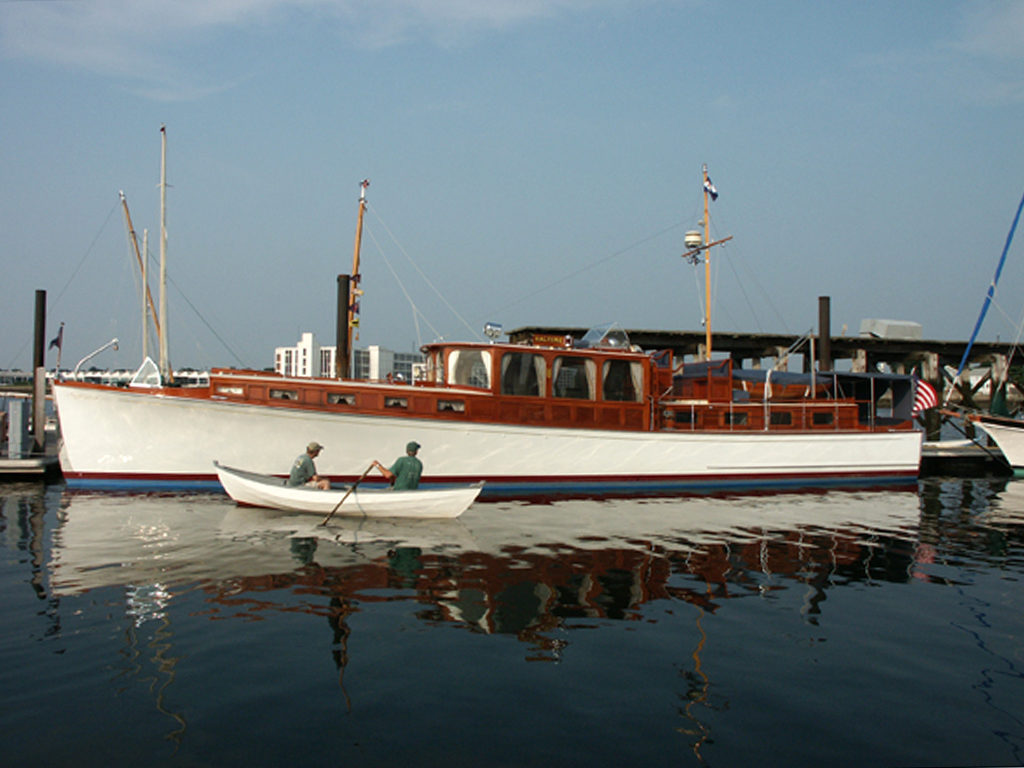 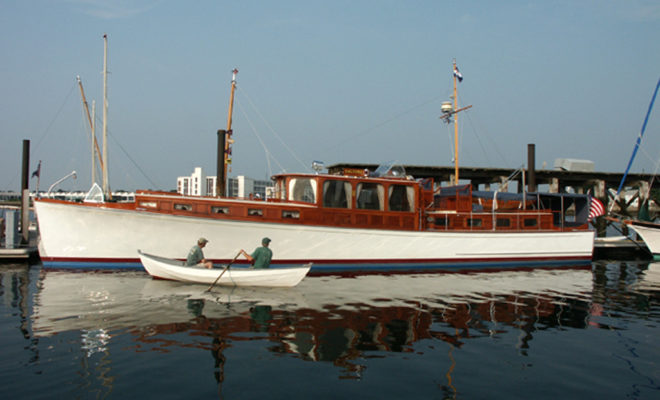