Annapolis, Md – The United States Powerboat Show in Annapolis closed the curtains Sunday, October 6 on a banner year. At 5:00 pm a cannon shot rang out, hundreds of horns sounded their approval, and nearly 1,000 engines fired up to begin the move-out of the 48th annual Annapolis show.  This year’s show displayed more boats, occupied more square footage, and entertained more guests than any of the forty-seven that preceded it. Dozens of boats were sold, and satisfied customers walked away with bags full of merchandise.
“We are absolutely thrilled at the response we received to our show this year,” said Paul Jacobs, President of the Annapolis Boat Shows. “Manufacturer and dealer contracts grew across the board and buyers came out in large numbers to reward them for their effort. Nearly every exhibitor we talked to had positive reports of solid sales numbers, long lead lists, and happy customers.”
As previously reported, these fall Annapolis shows produce nearly a half million dollars in rent revenue to the City of Annapolis, create a reported $112,000,000 economic impact in Maryland, and are the economic engine that drives the mid-Atlantic maritime industry. The sales leads produced during these four days will keep boat dealers and brokers busy for months, with many new boat orders being entered into the production schedules for a 2020 delivery.
SOLD signs were sprinkled throughout the show, indicating that the boat business is alive and well in Annapolis. One manufacturer sold all eleven of the boats on display. Others exhibitors displayed multiple signs indicating sale successes. Vendors at the show deemed this past weekend as having the “greatest regional reach of attendance than shows past” and hosting the “most qualified buyers” resulting in record sales. These comments were echoed by Dustin Howard, Vice President, National Sales Manager at LH Finance, “This year was one of best Powerboat Shows we have been to. We spoke to a great amount of qualified buyers, have a ton of deals in the works, and saw a farther geographical representation of attendees than past years.” The weather through the four days was nearly perfect, with just enough of a threat of possible rain that even the foul weather gear vendors did brisk business.
“A ninety-six degree move-in day and some strong overnight winds tested our operations crews, but they came through, as usual, and delivered intact and on time” said Jacobs.  “We are always amazed at what these people can accomplish in a few short days, building a city of tents and a 500-boat marina in just four days.”  Now begins the enormous task of moving out all the boats, reconfiguring all the interior docks, setting new tents, and opening a sailboat show in just three days begins. “They will again do the impossible and pull the rabbit out of the hat.” 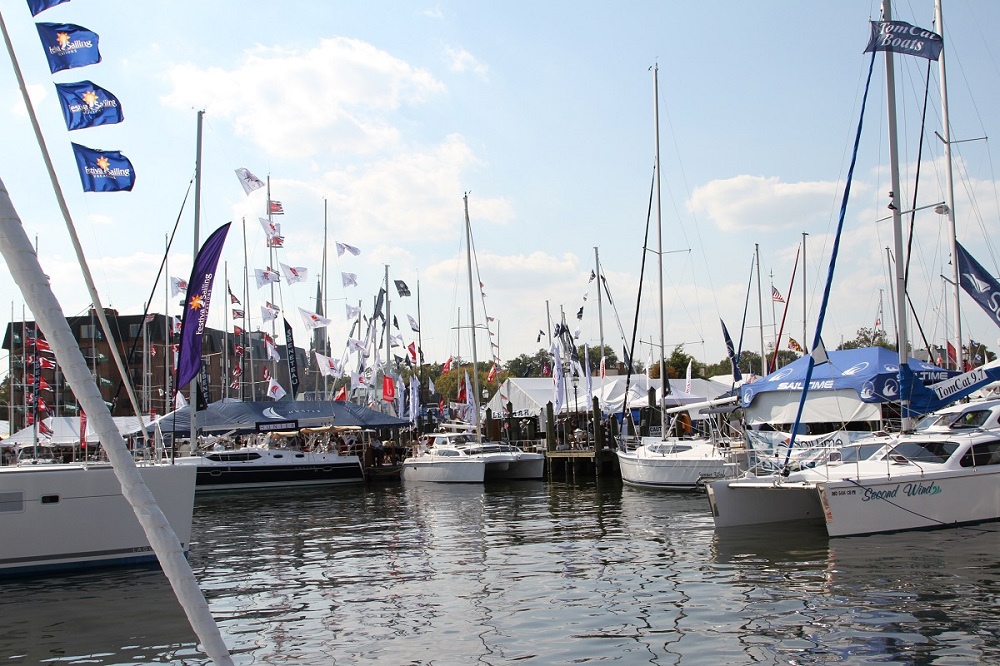