Cooking fish at home can feel daunting if you’ve never done it before but with a few common sense tips you’ll be on your way to cooking healthy seafood meals right in your kitchen.

When you are food shopping, purchase seafood last and keep it cold. Ask your grocer to pack your seafood on ice for the trip home.

Fresh whole fish should have:

Fresh steaks, fillets and loins should have:

Store seafood in leak-proof containers for up to two days in the coldest part of your refrigerator at 32 to 38 degrees F, or three to 10 months frozen. Shelf life will vary depending on product form and species.

Never store live (in the shell) oysters or clams in air-tight containers. Place them in a container with a lid that is slightly ajar and refrigerate for no more than five days. Oysters and clams will naturally open during storage. Tap the shell lightly. If it does not close, the oyster or clam is dead and must be discarded.

If you have seafood storage questions, ask your seafood supplier.

Thaw seafood in the refrigerator, never at room temperature. To use frozen seafood immediately, thaw under cold running water (1 to 2 hours per pound of seafood) or use the microwave defrost setting.

Prevent cross-contamination between raw seafood and other food products.

Wash your hands with hot soapy water before and after handling raw seafood.

Do not drip seafood juices on counters, utensils or other foods.

Always marinate seafood in the refrigerator, never at room temperature. Discard the marinade after use.

When in doubt, throw it out. Do not taste a food if you even suspect it might be spoiled.

A general rule for baking or broiling fish is 10 minutes per inch of thickness at 400-450 degrees F, turning the fish halfway through the cooking time. This rule does not apply to microwave cooking or frying.

Fish less than 1/2-inch thick do not have to be turned.

If fish is cooked in a sauce or foil, add five additional minutes to the cooking time.

The cooking time for frozen fish should be doubled.

Seafood with low fat content — like grouper, flounder and tilapia — should be basted when cooking with a dry heat method such as broiling and baking.

Fish is done when the flesh becomes opaque and flakes easily at the thickest part.

Most fish will continue cooking for one to two minutes after being removed from the heat, so plan for this in the cooking time.

Place fish, 1-inch thick or less, 2 to 4 inches from the source of heat.

Fish thicker than 1 inch should be placed 5 to 6 inches away from the heat.

Seafood with low fat content — like grouper, flounder and tilapia — should be basted when cooking with a dry heat method such as broiling or baking.

When pan-frying or sautéing:

Preheat gas or electric grill. Start the fire about 30 minutes before cooking when using a charcoal grill.

Fish is best grilled over a moderately hot fire and on a surface that has been well oiled.

When coals are white-hot, spread out in a single layer. Adjust the grill height to 4 to 6 inches above the heat.

Use indirect heat for a whole fish.

When cooking kebabs, put foods with the same cooking time together, as seafood cooks quickly.

Scallops, clams, oysters and shrimp become opaque and firm when fully cooked. Don’t overcook as this will result in loss of moisture, which affects texture and taste.

Place shrimp and scallops in a large pot of boiling water (four cups of water per pound of meat) and simmer three to five minutes.

Scallops and peeled and deveined shrimp will be cooked in three to five minutes.

Rock shrimp cook in about half the time of regular shrimp, so watch closely.

Shucked clams and oysters will be cooked in three to five minutes.

Seafood with lower fat content — like shrimp, scallops, clams and oysters — should be basted when cooked with a dry heat method such as broiling or baking.

Shrimp and scallops cook in three to five minutes.

Oysters and clams should be steamed until their shells open completely.

Always marinate seafood in the refrigerator.

When marinade is needed for basting, set aside a portion of the marinade before adding raw seafood. 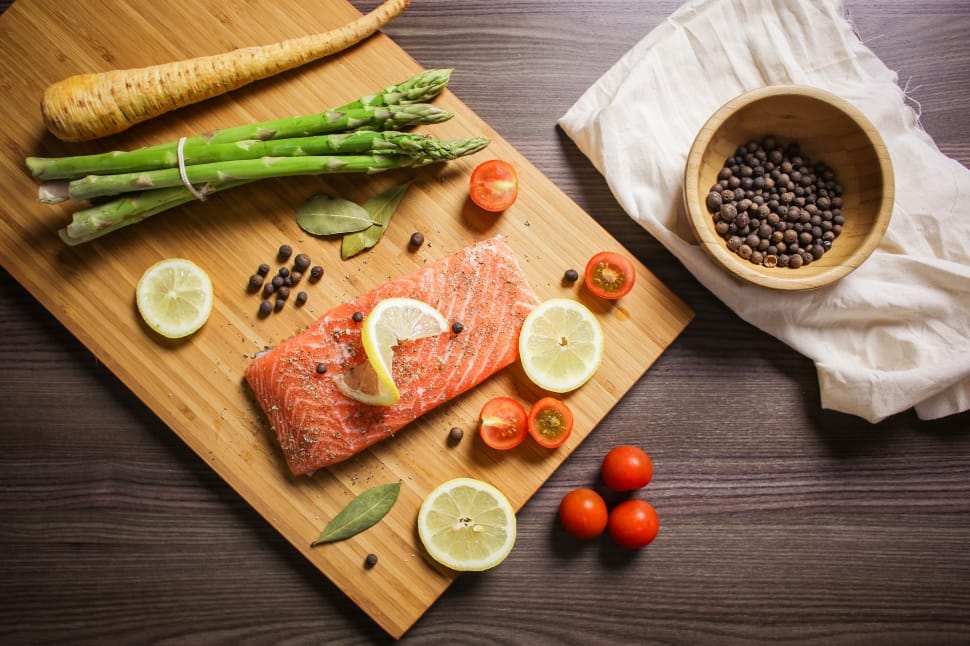