Researcher Believes He Has ID’d Shipwreck In York, Maine

The ship’s remains, which were last exposed by a nor’easter in 2018, are likely those of the Defiance, a sloop that washed ashore during a violent storm in 1769, said researcher Stefan Claesson, owner of Nearview, an aerial drone and archaeological surveying company.

The Defiance was built in 1754 in Massachusetts, which fits with historical documents and tree-ring dating conducted by Cornell University, he said.

But, he said, “additional historical research and archaeological investigations are needed to confirm the identification.”

All that’s left of the ship are the keel, and some ribs and planks that hauntingly reappear on the beach years a part due to the natural movements of the ocean floor at Short Sands Beach.

Claesson undertook the first scholarly look at the shipwreck with funding help from the Maine Historic Preservation Commission, using a combination of archaeological work, scientific dating and review of historical records.

The 60-foot Defiance set sail from Salem, Massachusetts, with a four-man crew and a load of flour, pork and English goods in 1769, but it it never made it to its destination of Portland, Maine, Claesson said. 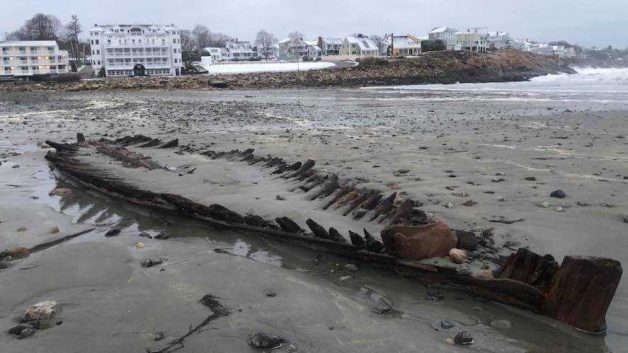