How to Survive Lightning Storms While Boating

Powerful, dangerous, highly unpredictable — all are common descriptions of lightning storms. A direct strike that results only in ringing ears and a few roasted electronics would be considered lucky. Unlucky would be through-hulls blown out, a sunk boat or worse — possibly serious injury or death.

Many powerboaters like to think that they’ve got the speed to simply outrun or get out of the way of lightning storms, or they figure they’re safe if they go boating only when it’s clear and sunny. That’s an attitude aided by the low odds of a boat being struck by lightning, which BoatU.S. pegs at about one out of 1,000 boats in any given year. No worries, right, mate?

Wrong. Engines can malfunction; big lightning storms can leave no room to escape; sunny mornings can turn into dark, threatening afternoons. If yours is the only boat in the area during a lightning storm, the odds of being struck go way up, leaving you and your crew vulnerable to millions of volts raining down from the skies. While manufacturers can build in a degree of protection, lightning protection begins with boaters being informed and prepared to take action in the event of a thunderstorm or actual strike. You should know the following techniques and strategies.

Timing
A strategy of boating only on sunny, cloudless days may work well in places like Idaho and California, but that would mean almost never using the boat in places such as Florida, Louisiana and much of the Midwest. For example, most of Florida — the Sunshine State — has at least 70 to 80 thunderstorm days per year, with some parts having more than 100 thunderstorm days per year (with increased activity during the summer months).

Absolutely, boaters should track VHF, Internet and television weather reports and make responsible decisions about whether to go boating depending on the likelihood of lightning storms. Short-term forecasts can actually be fairly good at predicting bigger storms, but small, localized storms might not be reported. This is when knowing how to read the weather yourself can come in handy. (The U.S. Power Squadrons offers great weather courses for boaters, and there are many books that cover the basics.)

Lightning strikes typically occur in the afternoon. (Florida estimates 70 percent occur between noon and 6 p.m.) A towering buildup of puffy, cotton-white clouds that rise to the customary flat “anvil” top is a good indication to clear the water and seek shelter — or move out of the storm’s path if possible. That’s if the storm is at least somewhat off in the distance (most storms are about 15 miles in diameter and can build to dangerous levels in fewer than 30 minutes). If lightning and thunder are present, just count the seconds between the lightning and corresponding thunder and then divide by 5 — this will provide a rough estimate of how many miles away the storm is. 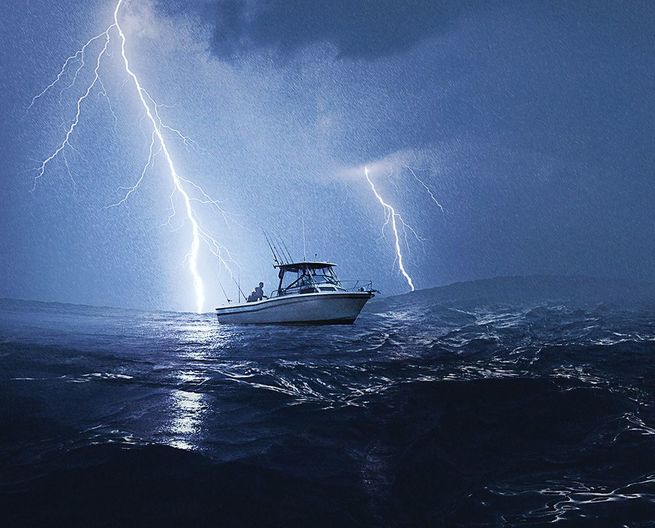