White perch and catfish remain the primary targets of Upper Bay anglers. Small rockfish have been caught as well. Bloodworms or Fish Bites work on the perch and small rock while cut, fresh bunker is the bait of choice for the catfish.

Black drum continue to give lots of excitement to anglers fishing off of Slaughter s Beach at the Coral Beds. There is often quite a fleet of boats out there and it may be better to move away and find a spot of your own. Clams have been the best baits, but blue crabs are another good offering and may cull out some of the sharks and skates. 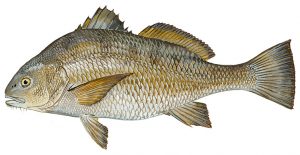 A few flounder have been caught out of the Lewes and Rehoboth Canal on minnows, squid and Gulp!. The rain and wind over the weekend did not help the situation in that shallow water.

The fishing pier at Cape Henlopen State Park saw the first croaker of the season and a few more spot, but here too the weekend weather did nothing to make for better fishing. A few flounder were caught from the pier on Gulp!. The spot and croaker were taken on bloodworms. Crabbing from the pier is improving.

The reef sites in the Lower Bay saw the first kings of the season. Small trout along with a very few keepers were also taken. Bloodworms worked on both species.

The hickory shad have been joined by the occasional small bluefish. Both have been caught on shad darts and small spoons. The action did drop off over the weekend when the wind and rain had the inlet boiling.

A few large rockfish were caught from the jetties by very brave or completely deranged anglers. Swimshads or bucktails remain the top baits.

I did not hear of any flounder caught out of Indian River Bay, but I feel certain a few were caught after the storm.

A few slot and larger rockfish were caught from the beach right after the storm. Cut bunker was the bait. This action seems to have been south of Indian River Inlet. A few kings have been reported on bloodworms at Three Rs Road. 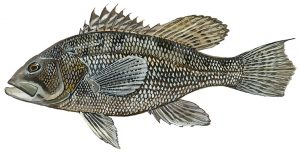 Black sea bass remain the top fish for the inshore boats. Boat limits are still being caught by those who have good numbers of locations not already cleaned out of keepers.

Shark fishing took a holiday over the weekend.

Bluefin tuna were landed at Indian River Marina. Several boats had their two under and one over limits.

Be sure you understand the regulations for bluefin tuna before you put one in the box. Also make sure you have your Migratory Species Permit before you leave the dock.

Tilefish have been landed as well. This is another species with special regulations. Be sure to abide by them.

The cool weather is helping trout fishermen on White Clay Creek catch some nice rainbows. The occasional smallmouth bass is an extra bonus.

I have a photo of a bowfin caught by a gentleman by the name of Greg in Sussex County. I hope to have more information on the unusual catch by next week.

The Delaware ponds and the upper reaches of the tidal creeks and rivers continue to produce bass, pickerel and crappie.

When I ran my saltwater fishing seminars, the first class of the six always began with knot tying. I have found that many fishermen cannot tie good knots and thereby lose fish.

The first is the perfection loop. Use this to tie a loop in the end of your bottom rigs, snelled hooks and leaders.

Next is the clinch knot. I use this to tie just about everything to my line or leader.

The Albright knot is used to connect braided line to a mono or Fluorocarbon leader. It is a bit tricky to tie but I have never had one fail.

I use the surgeon’s loop to make top-bottom rigs. It is easy to tie and will break off when you sang bottom.

Once you learn how to tie these knots you are all set to fish the inshore grounds and the surf. Should you decide to go offshore or, heaven forbid, take up fly fishing, you will have an entire new list of knots to learn.