Several species of crab are found in Washington’s marine waters and along its shores, though only a few are large enough to be of commercial and sport interest. Crabs are crustaceans, having an exterior skeleton or shell. When crabbing in Washington, it’s important to be able to identify your catch, to ensure you’ve caught the correct species. It’s also important to identify whether a crab is soft-shelled — crabbers must release all soft-shell crab.

One of the most popular items on Washington seafood menus is the Dungeness crab. This hard-shelled crustacean is fished from the Aleutian Islands to Mexico. The shell is purple-tinged, gray or brown on the back and the tips of the claws are typically white. The Dungeness crab can reach 10 inches across the back, though 6 to 7 inches is more common. In Puget Sound this crab is most abundant north of Seattle, in Hood Canal, and near the Pacific coast. The Dungeness crab is frequently associated with eelgrass beds and prefers sandy or muddy substrates.

The red rock crab (aka red crab, rock crab) is similar to — but smaller than — the Dungeness. This species usually measures less than 6 inches across the back and is characterized by large claws. Despite being less meaty than the Dungeness, red rock crab meat is also very tasty. It can be distinguished from the Dungeness by the presence of black on the tips of its claws and by its red coloration. The red rock crab also prefers rocky substrates, as the name implies.

Two deepwater species that are occasionally seen in Puget Sound and also occur in deep water off the coast are the box crab and its close relative, the king crab. The latter is called the king crab because of its large size when fully grown (up to 10 inches wide) but is not to be confused with the commercial king crab of Alaska. These crabs are more apt to be seen by divers than fishers with pots. Both are covered with wart-like tubercles and spines and resemble a rough box when their legs and claws are folded against the body. The box crab gets its name from the opening or foramen formed from matching semicircular notches in the claws and first walking legs. When the legs are folded tightly, water enters the gill cavity through this round opening. In the king crab this opening is absent.

Several species of tiny shore crabs can be found on Washington beaches. Contrary to what many believe, these are not the young of larger ocean crabs, but are simply small sized species. Under most rocks on Puget Sound shores you can find tiny black or gray hairy shore crabs ranging in size from smaller than a fingertip to about the size of a half-dollar. These are of two species, Hemigrapsus nudus and H. oregonensis.

What exactly is a soft-shell crab?

Crabs belong to a group of animals called arthropods whose skeletal support is provided by a “shell” outside their bodies. Growth is problematic because the old shell must be shed and a larger one formed in its place. This process, called molting, occurs many times through the crab’s lifetime. Dungeness crabs molt about 12 times by age 2, and then approximately once a year through age 6.

Data within Puget Sound suggests that while a given area may have one or two “peaks” of molting crab during the year, not all individual crabs adhere strictly to this pattern. Just before molting, the crab has formed the basic “template” of a new shell underneath its older shell. At this time, calcium is absorbed from the old shell and it becomes somewhat flexible. The old shell splits at the back of the crab and it backs out of its old skeleton — even the eye stalk and gill coverings remain with the old shell.

Why is there a requirement to release soft-shell crabs?

More significant, however, is that the meat from a soft-shell crab is of very low quality compared to meat from a harder cousin. People have described this meat as watery, mushy, lacking in texture, or even “jelly-like” and as a result it is often thrown away. Carefully releasing these soft-shell crab eliminates this wastage and allows the crab to be harvested later, when meat quality and quantity is greatest.

How do you determine if a crab is soft-shell?

The definitive test for identifying a soft-shell crab is the pinch test. When done correctly, the pinch is delivered by the recreational crabber to the crab and not the other way around.

1. First make sure the crab is of legal size and sex to keep. Otherwise, there is no need to pinch it. Grab it from the back and turn it upside down.

2. Carefully push the “elbow” of one claw towards the mouth of the crab, exposing the shell that is usually covered by the folded claw.

3. Pinch the shell with your thumb at the point shown, gradually increasing the pressure. Remember, you do not want to break the shell while performing the test (crabs can bleed to death). If the shell flexes or bends, release the pressure and return the crab carefully to the water. Take care not to drop any released crab onto hard surfaces and do not fling them roughly into the water. If the shell has not flexed and you have reached the point at which you would have easily crushed a tough peanut, then you have a hard (and legal) crab to keep for the table.

Experienced crabbers note that there are other indicators that crabs may be soft-shell. Some pinch the center of the large section of the first walking leg in a test similar to the one above. In most cases, the two pinch tests yield identical results, but some crab will pass the former test while failing the leg test. After lifting many legal size crab, people note that the crab which seem light for their size are generally soft-shell. The shells of soft-shell crabs also tend to be white on the underside, while those of hard-shell crabs are a darker yellowish brown and often covered with barnacles and algae. 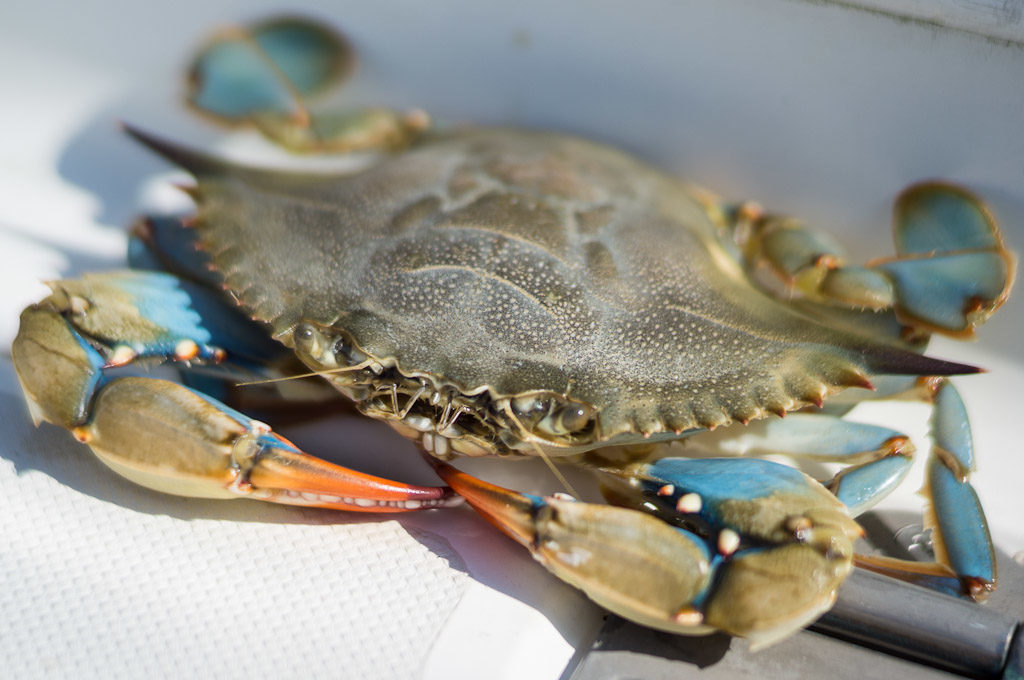