The History of Transporting Fish by Rail

The U.S. Commission of Fish and Fisheries, commonly known as the Fish Commission, was created in 1871. One year later, Congress added fish culture to its scope of work. Commissioner Spencer Baird had already been allotted $5,000 — about $110,00 today — by Congress to study and recommend solutions to the apparent decline in New England fish. The newly formed American Fish Culturists Association urged Congress “to take measures for the introduction and artificial propagation of shad, salmon, and other valuable food fishes throughout the country.” This new task received Congressional support and $15,000 — about $328,000 today — was allocated to the commission for research and promotion.

Fish culture was viewed by many as a possible solution to depleted East Coast populations like salmon and American shad. It was also a means to introduce new fishes to new waters, creating economic opportunity and a new source of food for a growing population. It soon became a major focus of the Fish Commission’s work.

But how would fish eggs or live young fish be transported for release a great distance away? Railroads provided a safe and inexpensive solution.

Livingston Stone, a prominent fish culturist and founder of what became the American Fisheries Society, was hired by Baird and immediately set to work. On August 30, 1872, he collected and fertilized salmon eggs at what became the Baird Station on the McCloud River in northern California. He then shipped them to the East Coast by rail.

After a few unsuccessful attempts with introducing other species, Stone released 35,000 Hudson River shad into the Sacramento River in July 1873. After repeated efforts, the Atlantic species became well established on the West Coast.

The live fish were transported in open milk cans in baggage cars. Stone changed the water every two hours to keep the water temperatures at suitable levels during transit. After days of around- the- clock care, most of the shad arrived in good condition. They were planted in the Sacramento River and other coastal streams. The experiments in acclimatization — introducing new fish to new locations — were a success. 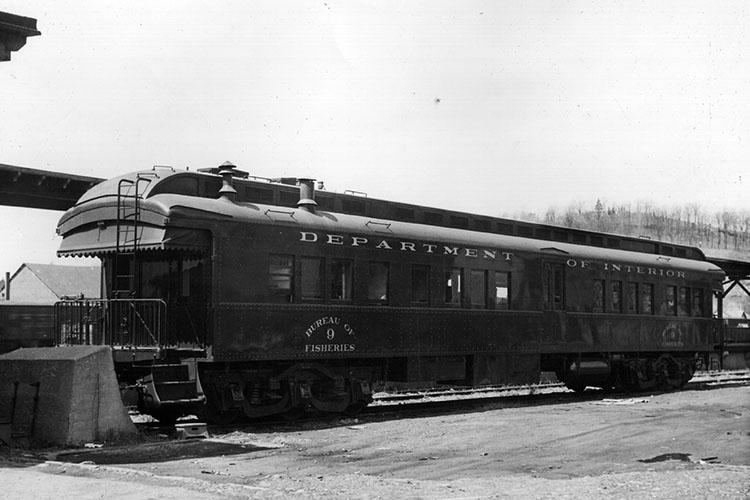