Why Mariners Use Knots Instead of Miles Per Hour

Why does a mariner (and, for that matter, an airplane pilot) measure their boat’s speed in knots, rather than miles per hour or kilometers per hour? The answer goes back to the 17th century and remains true today.

The nautical mile has two origins

The answer as to why mariners measure speed in knots evolved from both a strange custom of measuring speed and how the circumference of the earth was measured.

In times dating back to at least the 1700s, captains measured their ship’s speed by tossing a long rope in the water with “knots” tied at even intervals. The rope had a wood chip at its end to hold it in place where it was tossed into the water. Then, the number of knots pulled off the stern in a given amount of time, based on a certain amount of sand flowing through an hourglass, were calculated as “knots per hour.”

Over time, this custom aligned with the second, more mathematical way in which a knot was calculated. When the earth’s circumference came to be measured in “minutes,” then 60 minutes made one degree of the earth’s 360-degree circumference. Coincidentally, the time it took to travel one minute of latitude in one hour became one knot. So, a knot is a measure of speed, not distance.

Thus, these equivalents evolved: a nautical mile became 1.15 statute miles (or 1.85 kilometers), or one minute of latitude, which is the distance a boat travels in one hour going one knot.

While the measurement technique using rope knots dates to the 17th century, it wasn’t until 1954 that the U.S. adopted the exact measurement of the nautical mile. The U.K. didn’t come on board until 1970. Until then, each country had its own interpretation of what a speed of one nautical mile per hour meant.

The benefit of keeping with the knot measurement

Why haven’t the measurement gurus come together to decide on a uniform measurement for all travel (such as cars, boats, planes, and trains) in all cases?

The answer seems to have something to do with travel over the curvature of the earth. Cars and trains, known for shorter travel segments, use miles per hour or kilometers per hour. Boats and planes, which often travel longer distances affected by the earth’s curvature, use knots. Knots are a more accurate way of predicting how a boat (or a plane) traverses the face of the earth. That’s why nautical charts include and depend on longitude and latitude measurements.

Because a nautical mile is longer than a statute mile, a ship going 20 knots is going 23 miles per hour. (Conversely, a small airplane going 173 miles per hour is traveling 150 knots.) If you are sailing in a hurricane, it may not matter to you whether the wind is blowing at a Beaufort 12, 78 mph, 124 kph or 68 knots. But mariners can more quickly understand conditions when stated in knots. Airspeed indicators on planes and boats show knots. Conveniently, the knot is used in meteorology, too.

Knots also are the preferred measurement for moving fluids, including water in rivers and oceans. Mariners are given the speed of a river current, wind speeds or tidal stream speeds in terms of knots, making it easier to calculate how their boat or ship must compensate for navigational direction.

And, of course, the numbers a boater sees on certain markers are in knots. For instance, a speed restriction buoy with the number “8” on it means speed in that area is restricted to 8 knots.

For historical, astronomical, and meteorological reasons, then, the knot has become the standard for travel on our watery world, a standard that is likely to remain. 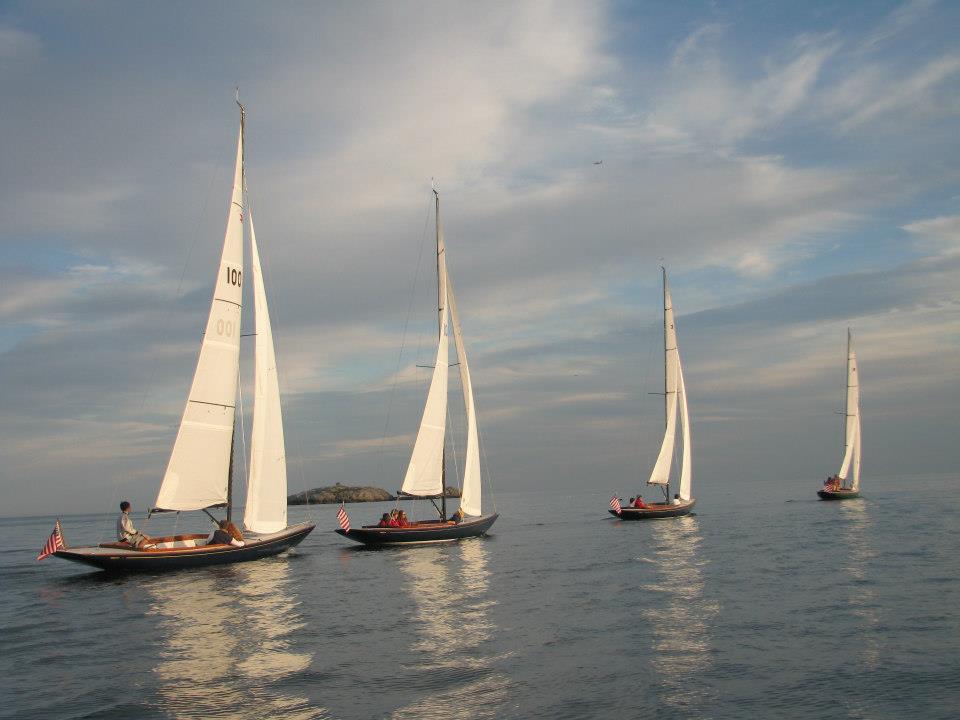 Even with practically no breeze, the Marblehead High School Sailing Team had a spirited race. Photo by Dave Kinney.