NOAA: 2022 Hurricane Season Could Be Extreme

The 2022 hurricane season is just underway (as of June) and runs until the end of November. Early indications are that it could be a wild one.

The New Names Are In

Alex already hit in early June. Although most originate in the Atlantic, Alex began in the Pacific and crawled over Mexico, where it killed nine people. It then freshened in the Gulf and dropped nearly a foot of rain in Florida as a tropical storm before heading out to sea.

Destruction can be immense

You don’t have to go very far back in history to illustrate the horrible destruction of a hurricane. Hurricane Ida in 2021 (shown in inset photo) had sustained winds of 150 mph and caused 115 deaths from Texas to New England and more property damage than any storm to date ($95 billion). The storm cut power to 1 million residents in the Southeast and then wound up the Atlantic Coast, even flooding subways in New York City before petering out. Airports closed and Central Park had three inches of rain in one hour.

Ida shut ports in both the Gulf and along the Eastern Seaboard, halting shipping and increasing already problematic supply chain issues. Down in Louisiana, where the hurricane originated, 30% of the shrimp boat fleet was destroyed.

While the inland effects of hurricane activity are well known, the impacts to waterways can be equally as dramatic. In fact, Hurricane Katrina alone accounted for as many as 300 obstructions to navigation as charted by NOAA.

Because of their high winds, storm surge, rising sea levels, increased tides and heavy rainfall, hurricanes can be big trouble for boaters. Obviously, mariners who are on the water when they hear a hurricane warning should get to shore as soon as possible. Here are some guidelines for protecting watercraft ahead of a hurricane:

Prepare the boat. If you have time, remove detachable items, like sails, radios and other equipment and have the boat pulled from the water.

If you plan to keep the boat in the water, use two anchors and point the boat in the direction of the prevailing winds. Tie down anything that can’t be removed, such as tillers, wheels and booms. Wrap protective covering wherever the ropes touch the boat to prevent chafing. Seal off all windows, doors and hatches and make sure to shut off your boat’s fuel lines. Apply extra fenders to protect the sides of the boat from hitting the pier. 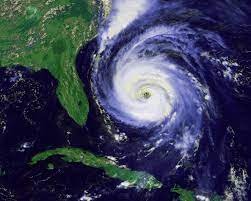