Back in the 90’s I had a business that photographed golfers on several golf courses in the Myrtle Beach, South Carolina area. While they played, I would run to the photo lab (yes, it was actually film in those days), get the film processed, run back to the golf course with the prints, and try to sell the golfers their pictures as they finished their round of golf. One day, one of the course managers asked me if I could find a plane and take some aerial photos of each hole on their two course layout. Thinking this would be easy money, I said yes. It took much longer than I had ever thought, and after doing circles in the sky for a couple hours, while looking through the camera, I was an interesting shade of green. And, I was hooked.

Fast forward a few years after a move back to Maine, and in 2005, I again found myself climbing into a Cessna 172 to shoot aerials of a few different construction sites for some of Maine’s larger construction companies. As the work increased, I was in planes and helicopters more and more, all over New England. And while most of my work continued to focus (pun intended) on construction projects, I started building a pretty serious collection of stock aerial photos.

When drones came onto the consumer scene around 2014, it was a double-edged sword. There was myself, and one other professional photographer, doing 95% of the aerial work in Maine. When the Hong Kong based company DJI started mass manufacturing drones, all of a sudden there were hundreds of overnight “aerial photographers” in Maine. It was the wild west of aerial photography, with people breaking the rules and flying their drones in a dangerous manner. Things have calmed down since then, and most of the overnight guys have moved on to some other shiny new penny. But the drones remain, and much of my business today revolves around using them for projects, shooting both stills and video.

Of the over 17,000 stock aerial photos Maine Imaging has of Maine and New England online, not one is from a drone. The sensor in a drone camera is small, and doesn’t possess a great deal of dynamic range. Drones are a great tool for what they are, but most are limited when it comes to still photography. For the last 5 years or so, I have been using Canon’s 5DsR camera bodies, combined with “L series” lenses. The bodies put out a 50+MB image file for incredible resolution and detail. I have used these bodies to stitch together “mega panos” shot from a hovering helicopter, of places like Boston, Portland and Boothbay Harbor. These mega panos produce a museum quality print to well over 10’. And the detail is so good, you can count window panes in windows from over half a mile away!

Over the years, I’ve done aerial photography work for several of Maine’s construction companies, most of Maine’s colleges, a handful of TV shows, lots of real estate companies, several magazines, a few of Maine’s cities, some engineering firms, hundreds of home owners, and a former US President. 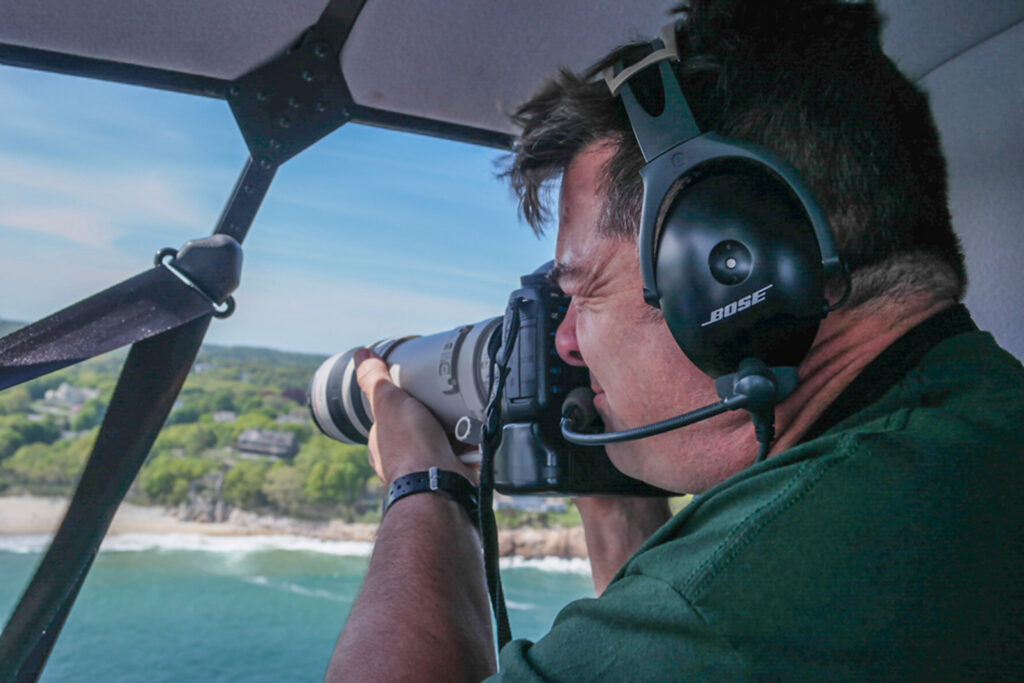 Dave Cleaveland Shooting Out of Helicopter by Maine Imaging.