Boating, Fishing, and Travel Information for Depoe Bay, OR 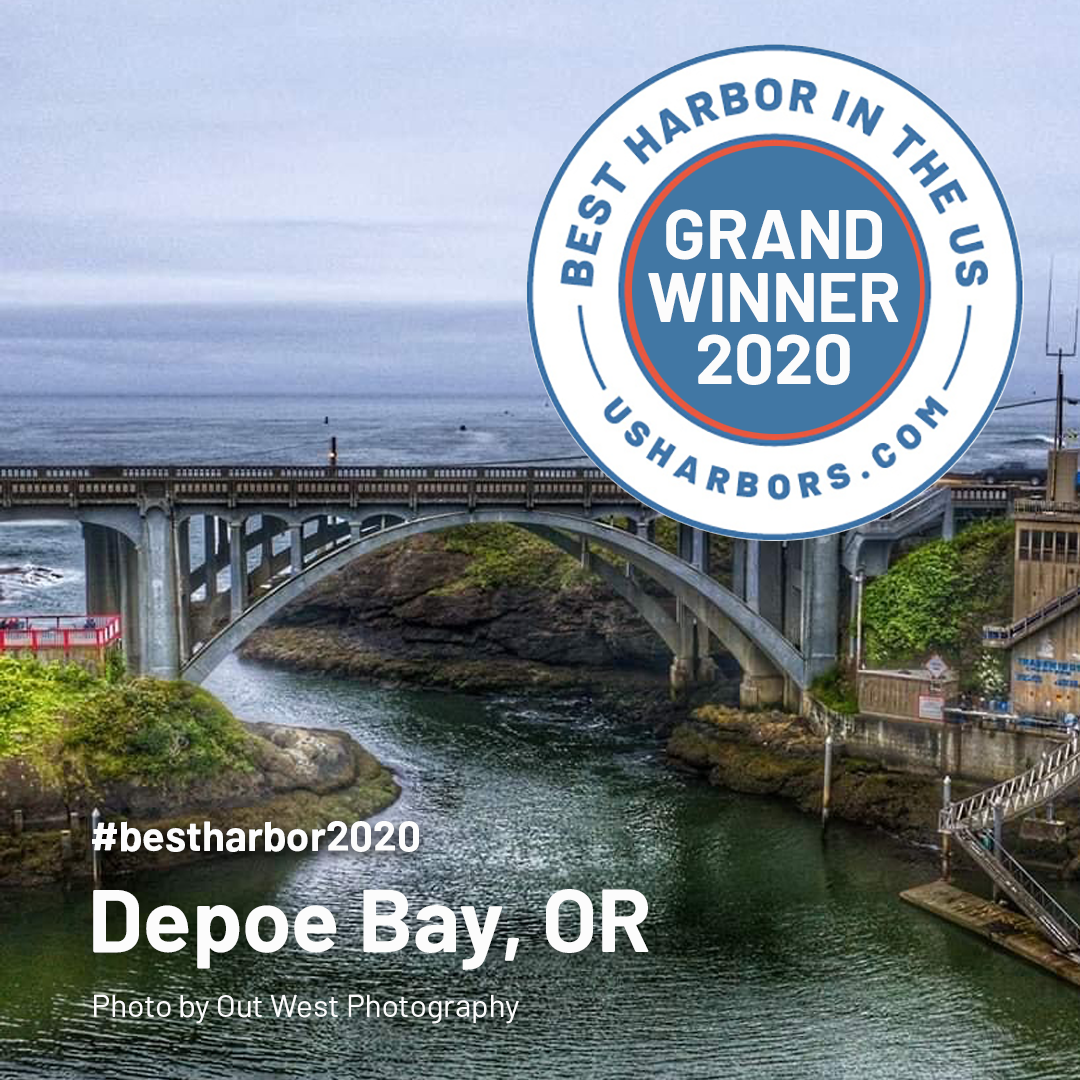 Depoe Bay’s 6-acre (2.4 ha) harbor has staked claim to the “world’s smallest navigable harbor”. Located 8 miles north of Yaquina Head, Depoe Bay has one of the best small-boat shelters along this part of the coast.

The Depoe Bay Whale Watching Center, also known as the Depoe Bay Ocean Wayside, is an Oregon State Parks-staffed visitor center in Depoe Bay, Oregon, U.S. to help visitors observe whale migration and provide information about whales and other marine mammals, including history, economics, and their environmental and ecological influences. The wayside provides a sheltered platform from which to view the ocean. First established as a wayside parking area on the Oregon Coast Highway in 1930, the wayside building was built in 1956 as a restroom facility for the popular spot. It is located just to the north of the Depoe Bay Bridge, also on the National Register.

This article uses material from the Wikipedia article: https://en.wikipedia.org/wiki/Depoe_Bay,_Oregon which is released under the Creative Commons Attribution-Share-Alike License 3.0

The basin has a concrete bulkhead, mooring floats, and a tidal grid for minor hull repair work. Also available are berths with electricity, gasoline, diesel fuel, water, ice, launching ramp, and marine supplies. Hull and engine repairs can be made. The town of Depoe Bay is on the N side of the basin.

In 1986, the reported controlling depth in the dredged channel to the fixed arched bridge was 8 feet; thence in 2009, depths of 6 to 8 feet were available in the basin with lesser depths to 3 feet in the SE corner. In 1994, shoaling to 4 feet was reported near the W edge of the channel under the bridge.

The fixed concrete arched bridge over the entrance is unusual in that its width of 30 feet is less than the clearance of 42 feet. The navigator is cautioned against the dangerous surge in the narrow entrance to the basin. Boats over 50 feet long cannot enter the basin without a special waiver from the harbormaster, and then only at highwater. The entrance should not be attempted at night or in rough weather without local knowledge.

COASTAL NEWS FOR JULY Updates from US Harbors In August we honor the dedication and courage of the United States Coast Guard. The Coast Guard traces its founding to an act of Congress on August 4, 1790, which is why on this day we celebrate the courageous work of these service… END_OF_DOCUMENT_TOKEN_TO_BE_REPLACED

For the latest fishing news for Oregon, click here.

By Domonique Tolliver. Fishing is in Lance Nacio’s DNA. When his great-grandfather came to the U.S., he settled in a fishing community called Manilla Village and made a living working the waterways around the village. While Lance Nacio’s father worked in the oil and gas industry, he also hunted and… END_OF_DOCUMENT_TOKEN_TO_BE_REPLACED

By NOAA. Today, NOAA Fisheries is releasing its draft Ropeless Roadmap: A Strategy to Develop On-Demand Fishing for public input. The report describes the current state of on-demand, or “ropeless,” fishing and outlines a path for increasing adoption of this technology in commercial fisheries in the Northwest Atlantic Ocean. The Roadmap… END_OF_DOCUMENT_TOKEN_TO_BE_REPLACED