As waves crashed against the shoreline in Encinitas on Monday, a bright blue hue overtook the ocean thanks to the return of an unpredictable natural phenomenon.

The bright blue light, created by phytoplankton through a process called bioluminescence, can only be spotted from the shoreline on rare occasions and is not yet entirely understood by scientists, according to the Scripps Institution of Oceanography.

The phenomenon, called a red tide, is created by a massive number of dinoflagellates, a type of algae that moves through the sea, Scripps scientist Michael Latz said.

The organisms have a color that makes the ocean appear red in the daylight, hence the term red tide. But, the organisms glow as a natural defense mechanism that becomes visible in breaking waves or when approached by other swimming organisms, especially at night.

It’s hard to predict when the phenomenon will occur, but there have been reports of bioluminescence along Southern California beaches for several weeks.

One lucky boater in Newport Beach spotted streaks of bioluminescence created by dolphins zipping through the ocean waters, which appeared to make the marine mammals glow in an electric blue shade. 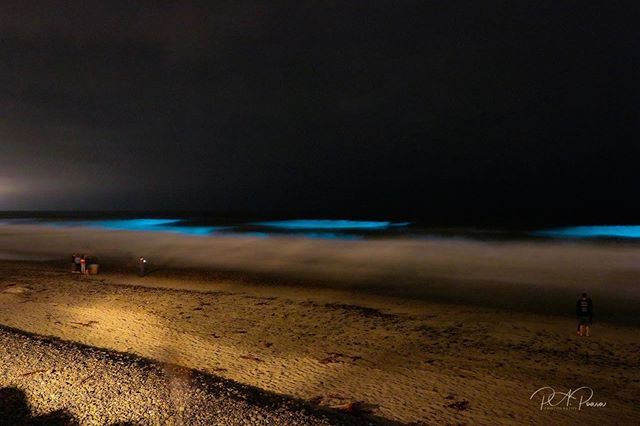