The Pacific Arctic is undergoing a rapid transformation. As temperatures rise and sea ice melts, some species will do better than others. A new study suggests that pink salmon may be one of those species.

“Our results suggest that warming is both increasing freshwater habitat and improving early marine survival of pink salmon in the northern Bering Sea,” said Ed Farley, NOAA Fisheries biologist at the Alaska Fisheries Science Center, who led the study.

The study provides insight into the response of pink salmon to climate change. The findings are valuable information for commercial and subsistence fisheries, and fishing communities, preparing for future changes.

“Subsistence harvesters would like to know what foods may be available to them now and into the future,” Farley said.

“The importance of fish in Arctic subsistence economies cannot be overstated; they are some of the most commonly eaten foods,” said coauthor Todd Sformo, biologist at the North Slope Borough Department of Wildlife Management.

“In the past on the North Slope, salmon have been used for dog food and even considered nuisance fish when interfering with preferred species such as aanaakliq or broad whitefish in the inland rivers. Recently, there seems to be a change both qualitatively and quantitatively in the use of salmon as a main dish and for smoking.

“Participating in this study allowed me to present a subsistence perspective, learn how fellow researchers measure production dynamics, and better understand how pink salmon are responding to climate warming in the northern Bering Sea. While this research is further south than the waters surrounding the North Slope, it is a beginning of our attempt to account for potential change in subsistence fishing.”

Pink salmon are the most abundant salmon species in the North Pacific Ocean. Over the last decade, their production has increased.

The Pacific Arctic is part of the North Pacific Ocean. It encompasses the Chukchi and northern Bering seas. The Pacific Arctic marine ecosystem, like other high latitude regions, is on the forefront of climate change.

“We’ve been working in the north Bering Sea for about 20 years, and sporadically in the high Arctic. It has changed dramatically in that time. We didn’t expect to see this much loss of sea ice for 20 more years,” said Farley. “But it is already happening.  The ecosystem is transforming. Seabirds have shifted from fish-eating species to plankton-eating species. Fish such as walleye pollock and Pacific cod are moving north in large numbers. And we are seeing big changes in salmon populations.”

Pink salmon have been in the Pacific Arctic region for thousands of years, but in relatively low numbers. Abundance in the Arctic remains low compared to areas further south, but that may be changing.

Pink salmon have a 2-year life cycle, spent in both freshwater and marine environments. Due to this short life cycle, they respond rapidly to ecosystem change. That means pink salmon can provide unique insight into impacts of warming on the Arctic ecosystem.

“A community-based monitoring effort called Arctic Salmon has documented a general trend of more pink salmon being harvested in more places across the Canadian Arctic, especially over the last 10-15 years,” said Karen Dunmall, biologist at Fisheries and Oceans Canada. “While we do not believe that pink salmon have yet successfully established in the Canadian Arctic, these harvests indicate larger changes in the marine ecosystem. They are an obvious and tangible example of the influence of climate change on fish biodiversity in the Arctic.”

“We think pink salmon are moving north, seeking new territory as the population grows in the south. Until now, cold temperatures in freshwater rivers and streams were believed to limit pink salmon spawning in northern regions. As the region warms, more areas may open for spawning. There is also evidence that warmer sea temperatures benefit juvenile pink salmon early marine growth,” said Farley. “ Is the Arctic ecosystem system ready? Are pink salmon now able to become viable, sustainable populations in the Pacific Arctic? ” 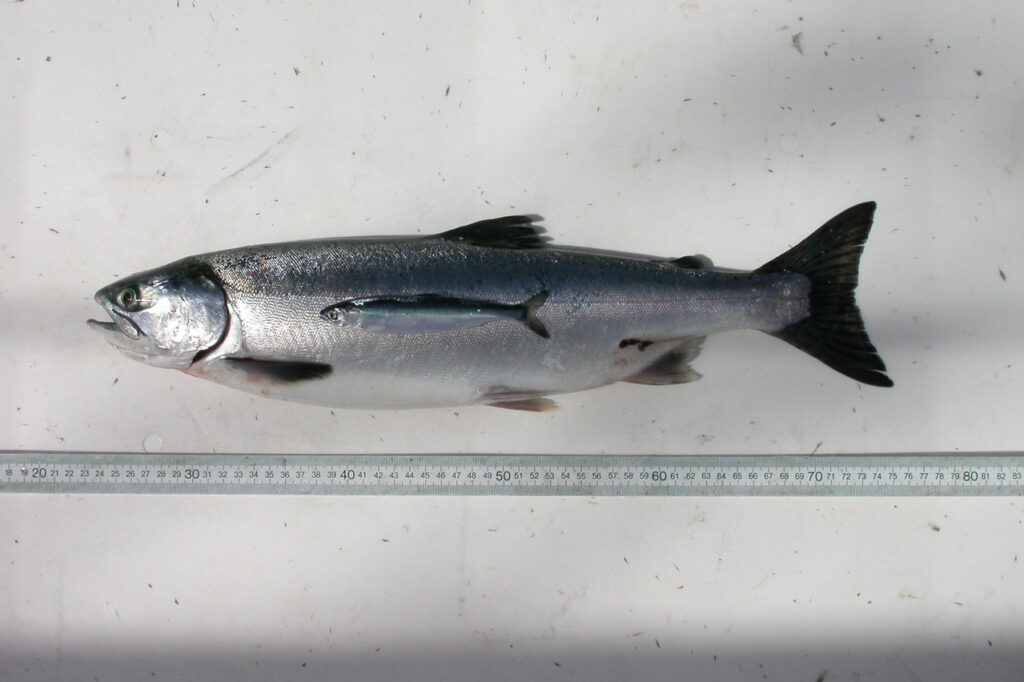