Then, Burtis heard The Nature Conservancy in partnership with The Pew Charitable Trusts was buying millions of bivalves around the country for rebuilding decimated oyster reefs — and he quickly joined the effort.

One recent day, he pulled up cages packed with eastern oysters on the New Meadows River in Brunswick, Maine, readying them to be trucked to oyster reefs on a patch of New Hampshire’s Great Bay.

“Yeah. it really has been kind of a lifesaver to be able to keep some revenue coming in,” said Burtis, decked out in orange waders as he poured the caged oysters into shipping crates.

The program, known as Supporting Oyster Aquaculture and Restoration or SOAR, is spending $2 million from an anonymous donor to buy more than 5 million oysters in New England, the Mid-Atlantic and Washington state to restore shellfish reefs at 20 locations. The Nature Conservancy is coordinating its efforts with the National Oceanic and Atmospheric Administration and U.S. Department of Agriculture, which offered similar but smaller programs in several states.

The SOAR program was launched in October with a goal of helping more than 100 oyster farmers, many who lost as much as 90% of their business during the pandemic. Their bigger oysters — known as Uglies because they’re too large for the traditional raw bar market — were piling up on farms due to a lack of demand, and the growing surplus was causing prices to crater.

Farmers needed to find a way to offload the oysters — and the program was made to order. It paid an industry—negotiated price of about 20% below pre-pandemic prices.

“What had started off as a great year for oysters going out to the restaurants just immediately stopped once the restaurants closed,” said Brian Gennaco, owner of the Dover, New Hampshire-based Virgin Oyster Company, which has sold oysters to the program and was among oyster farmers placing them in the Great Bay. 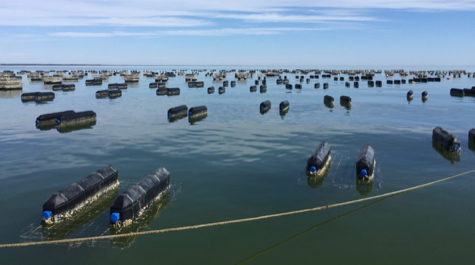