Why Did the Northern Shrimp Population Collapse?

An extreme heatwave in the Gulf of Maine in 2012 resulted in the warmest ocean temperatures in the region in decades. By 2013, the Atlantic northern shrimp population in the gulf had experienced a stock “collapse.” That is what fishery scientists call a rapid decrease in numbers that is not a natural fluctuation in stock size. Scientists studying the collapse have found that during this time, warmer temperatures were linked to increases in longfin squid, a major shrimp predator. They arrived in the Gulf of Maine sooner than usual and in more areas where shrimp occur.

”Our results suggest that longfin squid may have been a major player in the collapse of Gulf of Maine northern shrimp during an extreme heat wave event,” said Anne Richards, a biologist at the Northeast Fisheries Science Center’s laboratory in Woods Hole, Massachusetts.

Richards co-authored the study with Margaret Hunter from the Maine Department of Marine Resources Division of Biological Monitoring and Assessment. They recently published their conclusions in the online journal PLOS ONE.

A northern shrimp’s early life is highly influenced by temperature. The Gulf of Maine population is at the southern edge of this species’ distribution, and they are mostly found in the cooler western part of the gulf. 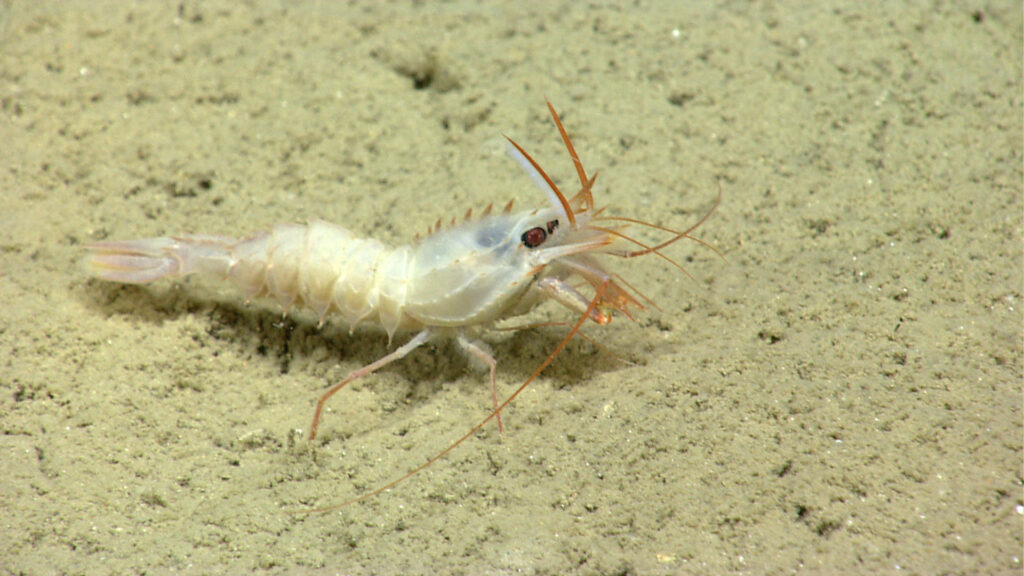 This interesting white shrimp was imaged while investigating the geomorphology and benthic habitats on the eastern wall of Alvin Canyon during the Northeast U.S. Canyons Expedition 2013.