The tornadoes that ripped across the central and southern U.S. late in the evening of December 10, 2021, were notable in many ways.

As we gather more data about this event, NOAA scientists have answered key questions about the potential influence of climate change on tornadoes:

Can a specific tornado be linked to climate change?

Attributing a specific tornado to the effects of climate change remains challenging. However, we can say that warmer winter temperatures attributed to climate change are projected to create conditions that make tornadoes more likely.

Because less than 10% of severe thunderstorms produce tornadoes, it is difficult for scientists to draw conclusions about the processes that lead up to tornadoes and their potential connections to climate change. Additionally, there needs to be a better understanding of how certain features of the environment that contribute to tornadoes will change in the future.

How unusual are tornadoes in December?

NOAA research estimates the likelihood of a tornado occurring on a December day in the U.S. is 12-15%. By contrast, the likelihood of an early June tornado is 90%. And although they are not as common, December tornadoes can still cause significant damage. Since 1879, 22 EF-4 and EF-5 category tornadoes — the most destructive — have occurred in December.

How did warmer winter temperatures contribute to this December’s tornado outbreak?

Warmer temperatures contributed to the development of thunderstorms, which were fueled by warm, moist air moving up from the Gulf of Mexico. Those storms then became tornadic because they developed in an environment where the horizontal winds from the ground up to about 20,000 feet increased significantly.

What do scientists know about the link between extreme weather and climate change?

Over the past decade, scientists have become much more skilled at using new tools and analytical methods to determine whether and how climate change has influenced many types of extreme weather events. The evolving science of determining if events are influenced or caused by human-caused climate change is known as extreme event attribution.

In particular, extreme heat events are now understood to be significantly influenced by the amount of human-driven greenhouse gases. Research shows that other types of extreme weather, including heavy precipitation events, storm surge, and wildfires are also being influenced by climate change. 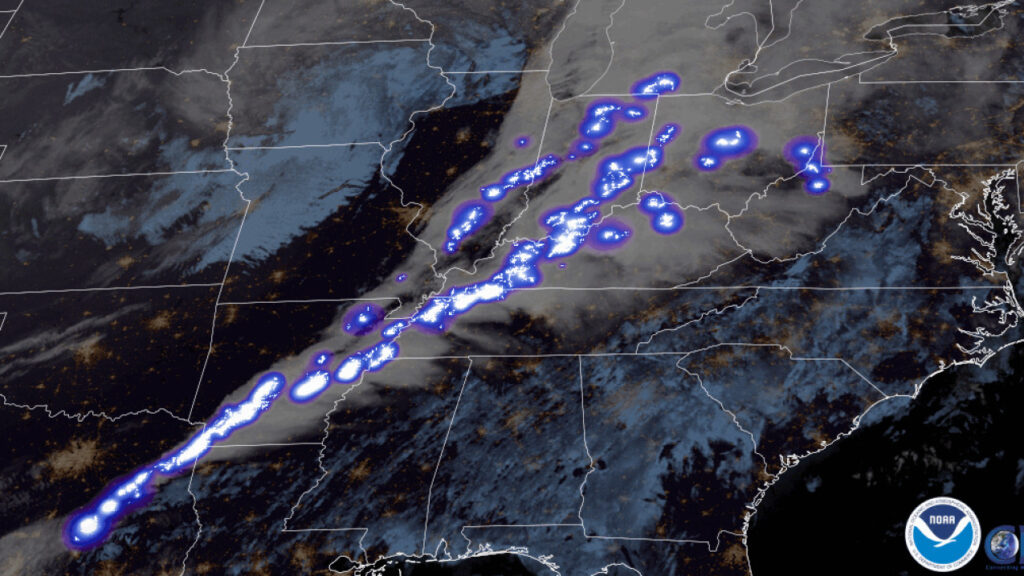 A view from NOAA’s GOES-16 satellite taken at 11:46 pm CST on December 10, 2021 of the tornado outbreak across the central and southern U.S. NOAA's National Weather Service (NWS) confirmed 61 tornadoes as of December 18, with several long-track tornadoes.