Venus and the Moon

The wafer-thin waning crescent moon, less than 4% lit, pairs with brilliant Venus on the morning of August 25, 2022. What a breathtaking sight! If you look early enough before sunrise, while the sky is still fairly dark, you’ll spot the moon’s unlit portion glowing with earthshine. As the sun nears the horizon and washes out the sky, the earthshine will fade away.

The moon ascends from the horizon first, followed by Venus. The pair spends some brief time together in the sky before the approaching sunrise turns up the dimmer switch. Venus and the moon are in Cancer the Crab.

Before daybreak comes, you might spot the bright stars Procyon and Sirius nearby. They form the bottom of the Winter Hexagon or Circle, which is reappearing after passing by the sun in June. Orion is also just returning to the morning sky.

The morning says goodbye to the moon when new moonoccurs a few days later, at 08:17 UTC on August 27. After that the moon returns to the evening sky.

The view from the Southern Hemisphere

If you’re in the Southern Hemisphere, you might want to hunt down the Beehive Cluster between Venus and the moon. Binoculars provide a closeup view of dazzling Venus, a smattering of stars in the cluster, and the moon’s sharp terminator. Check Stellarium.org for the view from your location.

The line of the moon, Venus and the sun cuts across the horizon at an angle in the Southern Hemisphere. That means you’ll have to spot them quickly, because there’s less than an hour between moonrise and sunrise. 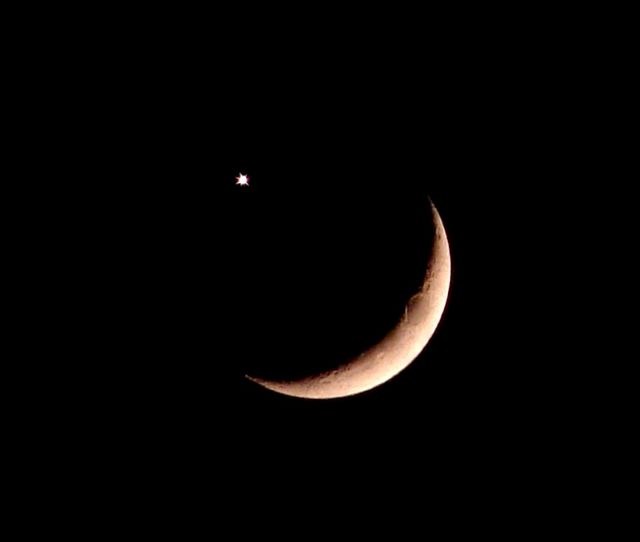