Breathing Life into the Ocean

From global to regional scales, images from satellites portray the dynamic beauty of the world’s oceans. Each view reveals something unique, from the seasonal pulses of life to the colorful signature of phytoplankton blooms.

Almost all life in the ocean depends on tiny photosynthetic organisms known as phytoplankton. These microscopic plant-like organisms capture carbon dioxide from the atmosphere and release oxygen. Phytoplankton act as Earth’s lungs and have produced about half of all oxygen on Earth.

One way scientists can track phytoplankton in the ocean is by measuring concentrations of chlorophyll—the compound that allows phytoplankton and plants to absorb energy from sunlight. There are several kinds of chlorophyll, but they all absorb blue and red wavelengths of the electromagnetic spectrum and reflect green light.

As the seasons change, chlorophyll concentrations change with them. Chlorophyll is especially abundant in spring and early summer, when plentiful light and nutrients support huge blooms of phytoplankton.

“The color of the ocean provides us with important information about phytoplankton, the health of the ocean, and the global climate,” said Ivona Cetinić, an oceanographer at Morgan State University and member of NASA’s Ocean Ecology lab.

Regional differences in chlorophyll concentrations are due to factors such as the shape of the seafloor (bathymetry), ocean currents, and nutrient availability. Near coastlines, phytoplankton thrive on abundant nutrients washed into the ocean from land and from upwelling of cold, nutrient-dense water from the deep ocean. In many cases the blooms are harmless. But rapid growth of certain types of phytoplankton in shallow coastal waters can create harmful algal blooms, which can lead to fish kills and produce toxins harmful to human health.

Some of the highest chlorophyll concentrations can be found in cold polar waters, where nutrients build up during the dark winter months. When spring sunlight returns, phytoplankton flourish. Near the equator, a streak of high chlorophyll concentrations can be seen where the ocean’s warm upper waters mix with the cooler, nutrient-rich waters from the depths. This process, known as equatorial upwelling, creates ideal conditions for phytoplankton to thrive throughout the year. 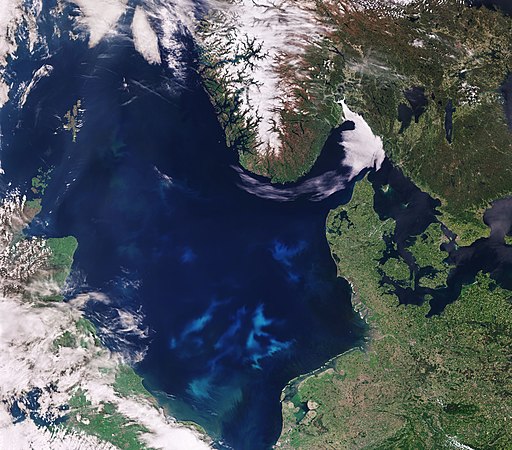