Having left a huge public maritime festival in Savannah, Georgia, on Monday, May 7, seven tall ships have made it to Cape Fear, North Carolina, completing the first leg of Tall Ships America’s 2012 TALL SHIPS CHALLENGE. Three of those ships will continue on to join four others in Greenport, New York, which is approximately 500 nautical miles away and due to host its own maritime festival beginning on Saturday, May 26, and continuing through Memorial Day, Monday, May 28. The festivals, coordinated by Tall Ships America with the help of local organizers, are part of a series of four to grace the Eastern Seaboard (Newport, Rhode Island, and Halifax, Nova Scotia, are next up, in July), and all participating tall ships have the option of competing in corresponding port-to-port races as they sail to each venue.

“The festival in Savannah brought to our ship the vibrancy that comes with thousands of curious onlookers,” wrote Eliza Braunstein (West Hartford, Connecticut), a deckhand aboard the 180-foot HMS Bounty, in her sailing log. (HMS Bounty did not compete in the race but is on its way to Greenport from Charleston, South Carolina.) “We met up with old friends we hadn’t seen since last summer and introduced them to new shipmates, but as every sailor knows, when the weekend ends and the tide flows out towards the ocean it is time to set sail.”

With light winds and choppy seas for most of the way up the coast, racing to Cape Fear was tough on the competing tall ships, which each have handicap ratings based on different rigs and varied sizes. Three ships retired early while the remaining four were unable to complete the course within the allotted time limit of 48 hours. Nevertheless, first place was awarded to the 159-foot topsail schooner Pride of Baltimore II, which had come within 16 nautical miles of the finish line when time ran out.

Tall Ships America’s TALL SHIPS CHALLENGE is an annual series that rotates on a three-year cycle between the Atlantic Coast, Great Lakes, and Pacific Coast. Over the past decade, the TALL SHIPS CHALLENGE has coordinated more than 60 events in 32 cities, stimulating strong tourism and economic development through associated family-friendly festivals. In 2013, all eyes will be on the TALL SHIPS CHALLENGE Great Lakes, when the ships will visit over 20 cities in the U.S. and Canada to continue the commemoration of the events of the War of 1812, including a re-creation of the 200th anniversary of the Battle of Lake Erie.

For more information about the tall ships participating in this year’s events, click here. 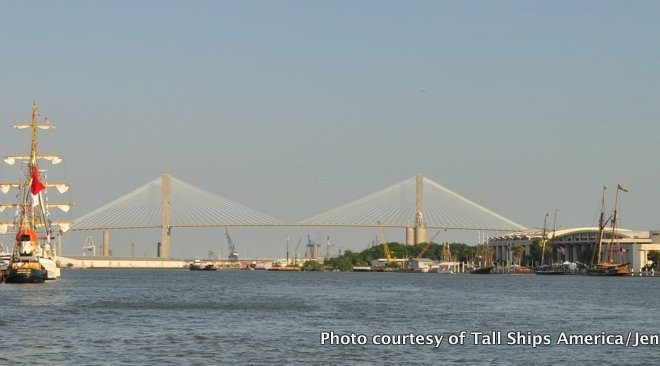