The Cape Cod Canal, which has been the hottest striper spot from shore, is turning inconsistent like most of the other places in southern New England. I went down Wednesday evening with my son, Ben, and we saw the usual flash mob of fishermen lined up along the canal waiting for the fish to come around with the high tide and the switch westward of the canal currents.

Things started off hot. On Ben’s first cast he nailed a 30-inch keeper on a needlefish. It got everyone around us all excited and casting, and plugs started hitting the water like a sudden rain shower. Another guy hooked up next to us and another farther down hooked up also. But, like a quick cloudburst, it was all done within fifteen minutes and not another fish was landed in the two and a half hours we stayed.

Word from some of the sharpies is that the Canal fished poorly Wednesday with only a few fish around. Monday and Tuesday evenings, however, were hot with everyone hooking up.

With the Canal, the fishing is all dependent on the bait (mackerel) moving through. If the bait is around, the fishing can be wild; no bait and it’s poor.

So, inconsistency has come to the hot waters of the Canal. In my mind, it is still worth a try since the place is still the best bet to hit it big from shore in southern New England right now. 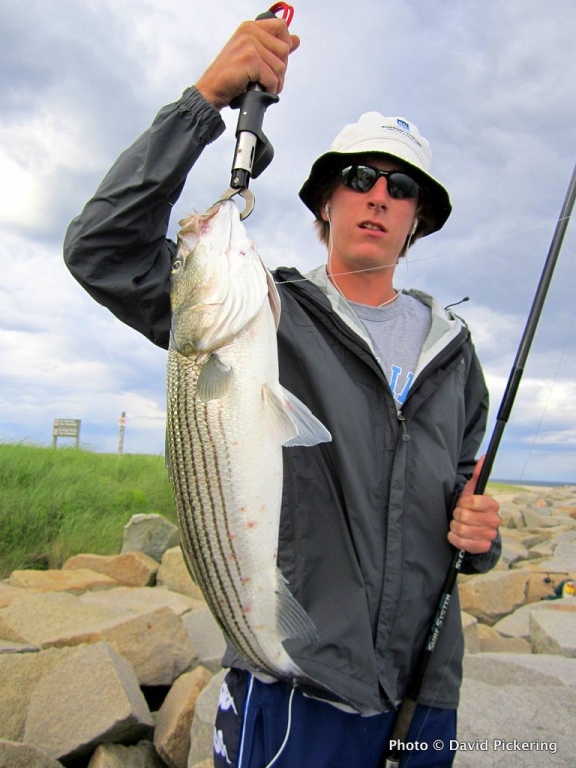 My son Ben with a nice 30-inch keeper Striper. Unfortuntely, it was the only fish we landed at the Cape Cod Canal recently.

My son Ben with a nice 30-inch keeper Striper. Unfortuntely, it was the only fish we landed at the Cape Cod Canal recently.