Biking Along the ‘Shining Sea’ in Woods Hole 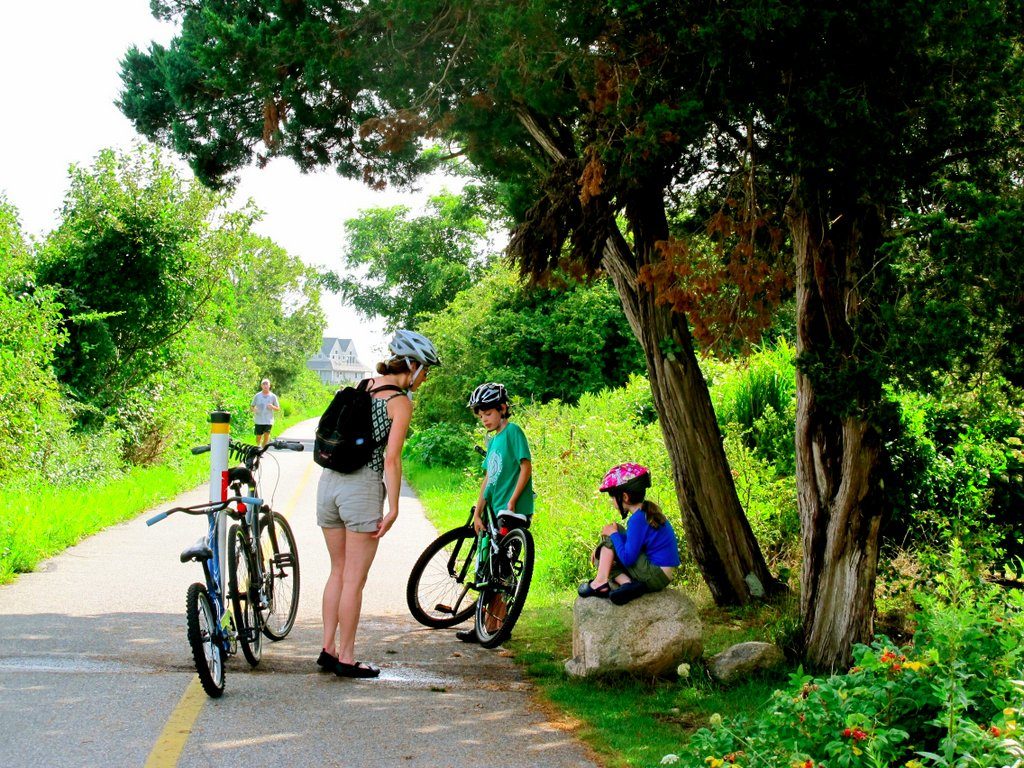 A family as they take a quick break before passing through the Surf Drive Beach section of the bike path.

On a sunny Cape Cod day, nothing beats riding a bike while overlooking long stretches of beaches and cranberry bogs. The “Shining Sea Bikeway,” was named after the song “America the Beautiful” written by Falmouth native Katharine Lee Bates. The name not only signifies a historical importance, but also reflects the beautiful beach views of this distinctive path.

The bike path extends along what was an old train route – originally running through Buzzards Bay, North and West Falmouth, Woods Hole and ending at the Falmouth Station. While it crosses a few roads, for the most part this right of way is all by itself in the woods or along the beach, a quiet and peaceful way to see the town.

In the 1970s, the Town of Falmouth opened a three-mile bike path on the route of the old tracks — from downtown Falmouth to Woods Hole. Nearly forty years later, a seven-plus-mile addition was added, extending the trail into North Falmouth. In total, the Shining Sea Bikeway is now a eleven-mile riding trail.

The bike path offers such an easy way to travel – I frequently bike to Woods Hole from my home in North Falmouth. Biking on the trail is such a breeze — the bike path runs away from the road, is paved, and for the most part level.

Starting in North Falmouth (the newer extension), the bikeway is shaded by trees that later open up and run straight through the cranberry bogs. Entering West Falmouth, the bike path overlooks Chapoquoit Beach. Words cannot explain how spectacular biking is with a view of the ocean. Soon Surf Drive Beach is in full view — the beach is so close you could literally jump a few feet and be standing in the glistening water. After Surf Drive Beach, the bike path ends in downtown Woods Hole.

Tourists love to explore Falmouth this way, with water views as they ride peacefully along, and places to stop for a bite to eat, enjoy a view of nature or take a swim all along the way. Who knew old train tracks could be converted into something as stunning and eco-friendly as the Shining Sea Bikeway?

Photos of Biking Along the ‘Shining Sea’ in Woods Hole 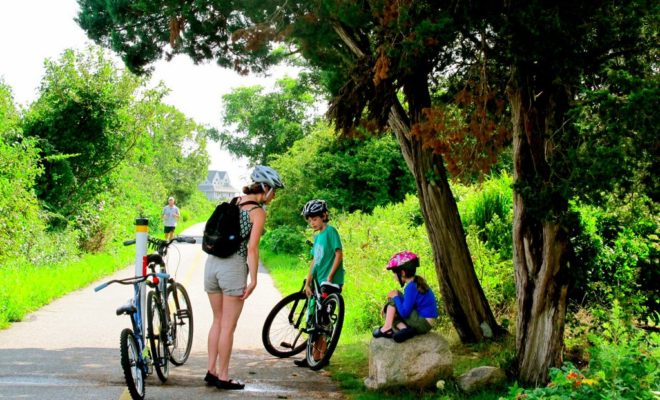 A family as they take a quick break before passing through the Surf Drive Beach section of the bike path.