Posted May 13, 2013 by Penobscot Bay Rendezvous

Get ready, boaters, for a party! The Penobscot Bay Rendezvous is on the map as one of the East Coast’s best regattas for power and sail. Last year, fifty-five sail and power boats gathered for the four-night, three-day event, co-hosted by Wayfarer Marine and Lyman-Morse Boatbuilding. This was a substantial increase from the inaugural event and organizers expect the growth to continue as the word spreads about the fun of this regatta. This year’s Penobscot Bay Rendezvous is planned for August 15-18, with events in Thomaston, Rockland, and Camden.

This event is geared to highlight the best of all that mid-coast Maine and Penobscot Bay has to offer – picturesque towns, spectacular coastline, great food and world-class hospitality and facilities. Make this event a summer destination. Just sign up and PBR takes care of the rest for a memorable weekend! To hear what folks have to say about the event, in their own words, click here.

For Sailors:
PBR welcomes both the hard-core sailor as well as the recreational sailor who is maybe not so competitive or concerned with getting around the marks first but would like to join in a new activity on the water. Ted Smith, the Rendezvous’ Primary Racing Officer, assigns everyone to his or her desired class so that everyone participates at his or her level of intensity. In other words, super yachts to daysailers are encouraged to participate. Skippers can recruit rock stars and pile on the rail meat or you can spend the day in the cruising class, leisurely going from mark to mark and join in the festivities each evening. Last year’s fleet featured a cruising class, two PHRF classes, plus the unofficial J160 Worlds, a double-handed and singled-handed class.

For Powerboaters:
Steve Bunnell, long time Maine cruiser, is the go-to-guy for the weekend’s powerboat owners and guests. Powerboaters will participate in two days of a Photo Pursuit and a Poker Run. What is a Photo Pursuit? First of all, it is not a race but rather a challenge to take memorable digital photographs from your boat. This is a great event whether you have been cruising Penobscot Bay for years or are visiting the area during your summer cruise.

Saturday’s course will include more powerboat photography, this time at speed, as the fleet crosses Penobscot Bay to the Vinalhaven and North Haven area. The Sunday Poker Run is the final on-the-water event for power boaters. Part exploration, part artistic endeavor, part history, organizers will make sure that each day’s Photo Pursuit is one to remember.

Each afternoon, contestants will download their best images with a team of Photo Pursuit Techies who will create a slide show of the day’s images. Well-known marine photographers Billy Black of Newport and Jamie Bloomquist of USHarbors, as well as Lincolnville’s Joseph Corrado and others, will choose the top three photographers for Sunday’s Awards Ceremony.

Let’s Not Forget the Party:
The event kicks off at Lyman-Morse. Popular local food trucks will serve fresh-from-the-oven pizzas, and other local favorites from Maine Coast Catering. The band “Girls Guns and Glory” will get the party going. A spectacular fireworks display will cap off a fun first night!

Friday morning, off the Rockland Breakwater, the Texas Flying Legends will perform heart-racing maneuvers – many below mast height for the awestruck fleet and the many onlookers on shore. The air show will be followed up by the start of the sailboat racing. A Crew Party will be held Friday night. A la Tour de France, yellow jerseys will be awarded to each division’s top finisher. A crew member must wear The Yellow Jersey during the next day’s competition or face some sort of penalty! The party will wrap up early enough so that participants can head into Camden for dinner at one of this town’s many excellent restaurants.

Wayfarer Marine’s Saturday night dinner dance is a sure highlight of the weekend. The cocktail hour is spent dockside with private tours of some magnificent new yacht, followed by a surf and turf dinner to fortify the guest before night of dancing.

After a final race and poker run on Sunday, the afternoon awards ceremony wraps up the weekend. Like the end of any great reunion weekend all head off with great memories and plans to attend next year!

For the full results from last year’s event, including the Photo Pursuit, click here. 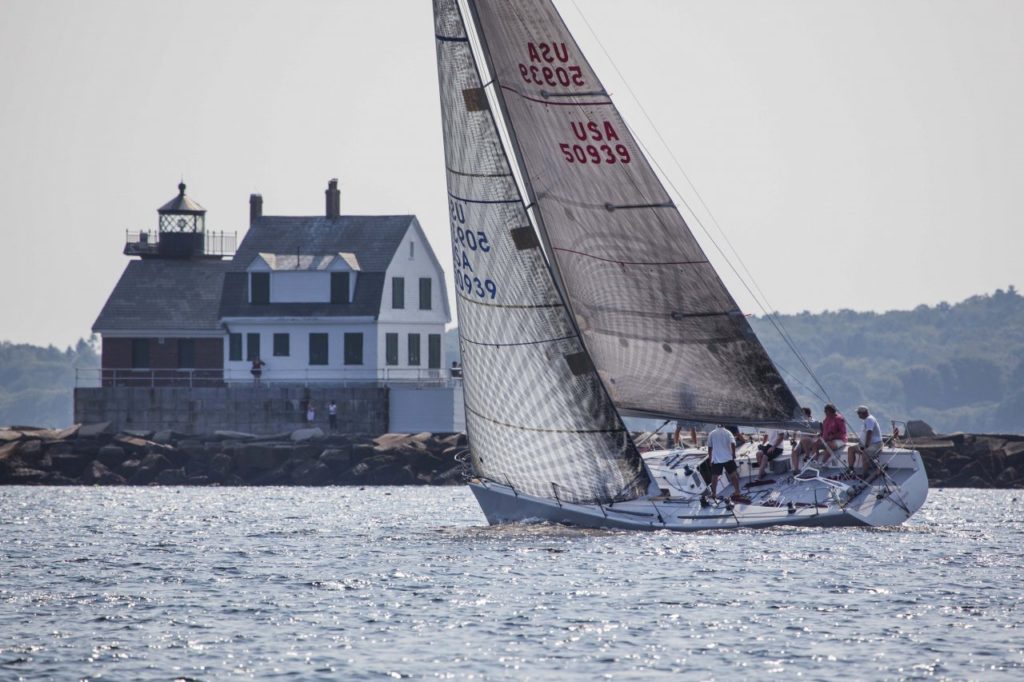 Posted May 13, 2013 by Penobscot Bay Rendezvous & filed under Boating, Travel. 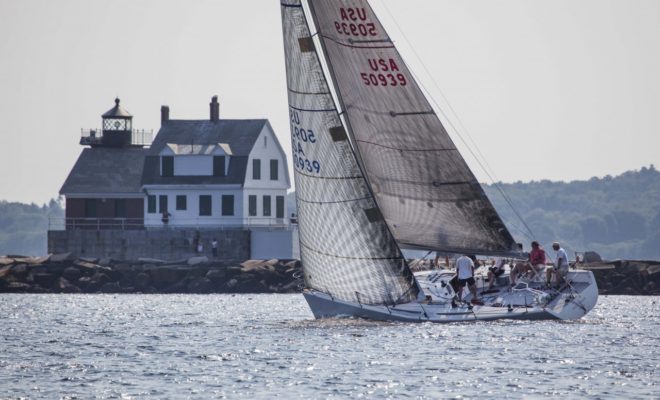