New Intracoastal Supermarket Will Allow You to Dock While You Shop

Attention boaters: There may soon be a Publix where you’ll be able to ease into a dock, scoop up some groceries and sail away without having to worry about South Florida’s traffic jams and parking lot fender benders.

The idea has gained traction after TransAmerican Development Corp. bought a 1.5-acre vacant lot at 3100 South Ocean Drive in Hollywood.

The land would be transformed into a three-story, waterfront building that would be home to the Publix, a two-level parking garage for cars and a very wide dock for the boats, said Albert Benalloun, president of the Miami Beach-based TransAmerican.

The dock also would be big enough where shoppers could sit and relax, sip coffee and “enjoy the view,” he said.

TransAmerican is seeking a building permit for the dock from the U.S. Army Corps of Engineers, which controls development along South Florida’s canals.

“Publix wants to do something for the community,” Benalloun said. “There is no grocery store per se on the barrier island. You have to go off the island to get groceries. Residents say they want access to quality grocery stores.”

A Publix regional spokeswoman in Miami did not respond to questions submitted by email. The company operates four locations in Hollywood, all west of the Intracoastal. The waterway site is not far from the Margaritaville Hollywood Beach Resort and the Diplomat Beach Resort.

“The city is very supportive,” Benalloun said. But he added there are land-side traffic issues to address with the neighbors, many of whom live in the condo towers along State Road A1A. He said he intends to meet with them to address any concerns.

TransAmerican, he added, will seek a site-plan approval from the city before year’s end, and hopes to start construction next year. 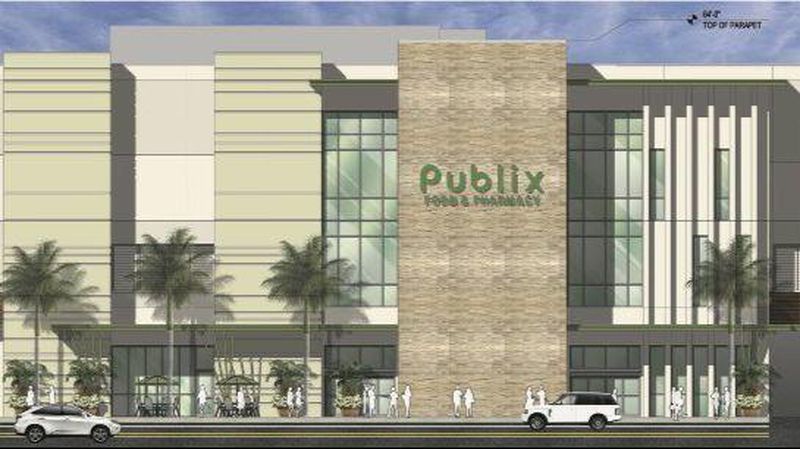 A Publix with a dock may be built at 3100 S. Ocean Drive, bordering the Intracoastal Waterway.