Boat Launched by US Students Lands in Norway

RYE, N.H. (AP) — A small boat launched in October 2020 by some New Hampshire middle school students and containing photos, fall leaves, acorns and state quarters has been found 462 days later — by a sixth grader in Norway.

The 6-foot-long (1.8-meter) Rye Riptides, decorated with artwork from the kids and equipped with a tracking device that went silent for parts of the journey, was found Feb. 1 in Smøla, a small island near Dyrnes, Norway, the Portsmouth Herald reported Monday.

It had lost its hull and keel on the 8,300-mile journey and was covered in gooseneck barnacles, but the deck and cargo hold were still intact. The student who found it, Karel Nuncic, took the boat to his school, and he and his classmates eagerly opened it last week. The school in Norway plans a call with the Rye Junior High students soon.

“When you’re sending it out, you have no idea where it’s going to end up, how it’s going to get there, if it ends up (anywhere) at all,” said Cassie Stymiest, executive director of Educational Passages, a Maine nonprofit that began working with the school on the project in 2018. 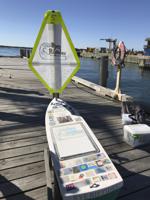