Happy Meteorological Spring! Warmer days and later sunsets are on the horizon, but before we get ahead of ourselves, let’s take a look at the March 2022 climate outlook from NOAA’s Climate Prediction Center. Temperatures during the upcoming month are favored to be above average across the eastern and south-central United States, and cooler than average across the western and north-central U.S. For precipitation, there’s a tilt in the odds towards a wetter-than-normal March across the east-central and northwest U.S., with drier conditions across the southern tier of the country. 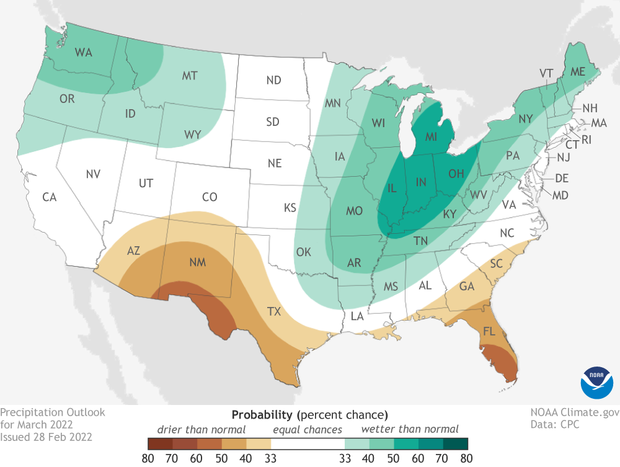 A reminder: the climate outlook maps are not a forecast for the absolute temperature or precipitation amounts in March. Instead, they are the probability (percent chance) that monthly average temperature or precipitation will be in the upper, middle, or lower third of the climatological record (1991-2020) for March. We refer to these categories as “well above” and “well below” average. The colors (red or blue for temperatures, brown or teal for precipitation) indicate which outcome is the most likely. Darker colors reflect higher chances of a given outcome, not more extreme conditions.