How much microplastic do whales eat? Up to 10 million pieces per day, Stanford research finds

Analysis of ocean plastic pollution and whale foraging behavior tracked with noninvasive tags shows whales are ingesting tiny specks of plastic in far bigger quantities than previously thought, and nearly all of it comes from the animals they eat – not the water they gulp.

The largest animals ever known to have lived on Earth ingest the tiniest specks of plastic in colossal amounts, Stanford University scientists have found.

Published in Nature Communications, the study focuses on blue, fin, and humpback whales and their consumption of plastic fragments no bigger than a few grains of sand, which are commonly called microplastics. The authors combined measures of microplastic concentrations up and down the water column off the coast of California with detailed logs of where hundreds of whales carrying tracking devices foraged for food between 2010 and 2019.

They found the whales predominantly feed 50 to 250 meters below the surface, a depth that coincides with the highest concentrations of microplastic in the open ocean. The planet’s biggest creature – the blue whale – ingests the most plastic, at an estimated 10 million pieces per day as it feeds almost exclusively on shrimplike animals called krill.

“They’re lower on the food chain than you might expect by their massive size, which puts them closer to where the plastic is in the water. There’s only one link: The krill eat the plastic, and then the whale eats the krill,” said study co-author Matthew Savoca, a postdoctoral scholar at Hopkins Marine Station, Stanford’s marine laboratory on the Monterey Peninsula.

Humpback whales subsisting primarily on fish such as herring and anchovies ingest an estimated 200,000 pieces of microplastic per day, while those eating mostly krill ingest at least 1 million pieces. 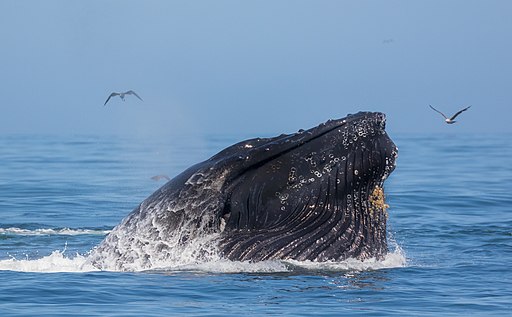