Beaufort (pronounced Bew-fert) is located in Beaufort County, South Carolina. It is on Port Royal Island which is surrounded by Broad River and Coo Saw River. The harbor of Beaufort is on the Beaufort River, which winds through the Port Royal Island area. The city is known for its well maintained antebellum architecture as well as for being home to a Marine Corps Air Station. The city is a popular tourist destination due to its proximity to the water and its arts culture. In fact, the city was named the “Best Small Southern Town” by Southern Living, a “Top 25 Small City Arts Destination” by American Style, and a “Top 50 Adventure Town” by National Geographic Adventure.

A municipal marina and a marina just to westward are on the south side of Beaufort, westward of the U.S. Route 21 highway bridge. Other marinas are eastward of the bridge, just inside the entrances to nearby Factory Creek and Broomfield Creek. Berths, electricity, gasoline, diesel fuel, water, ice, launching ramps, pump-out station, marine supplies and wet and dry storage are available at the marinas. The marina on Broomfield Creek has a 50-ton lift that can handle craft for complete hull and engine or do-it-yourself repairs.
Navigation:
Click the “Map View” button above to see a chart of this harbor.
Port Royal Sound, one of the largest deepwater harbors on the Atlantic Coast between Cape Henry and Key West, has an entrance about 2 miles wide between Bay Point on the northeast and Hilton Head on the southwest. It is about 50 miles southwest of Charleston and is the ocean entrance to Port Royal and Beaufort.
A Federal project provides for a dredged channel 27 feet deep across the bar and through the sound to Bay Point, thence 24 feet in Beaufort River to a 27-foot turning basin in Battery Creek at Port Royal.
The dredged channel is well marked by lights, lighted ranges, and buoys. The channel in Beaufort River, from the dredged channel northward to Beaufort, is part of the Intracoastal Waterway and had a reported controlling depth of 12 feet in 1983.
The Intracoastal Waterway continues along Brickyard Creek and into Beaufort River. On the west side of the waterway at Mile 536.0 is the town of Beaufort.
The Ladies Island (U.S. Route 21) highway bridge over Beaufort River at Beaufort has a swing span with a clearance of 30 feet. The bridgetender monitors VHF-FM channel 16 and works on channel 13; call sign, KT-5439. Extreme caution is advised when running through the bridge with a current; cross currents are encountered in the approach on flood and ebb.
A fixed highway bridge with a clearance of 65 feet crosses the waterway at Mile 539.7. 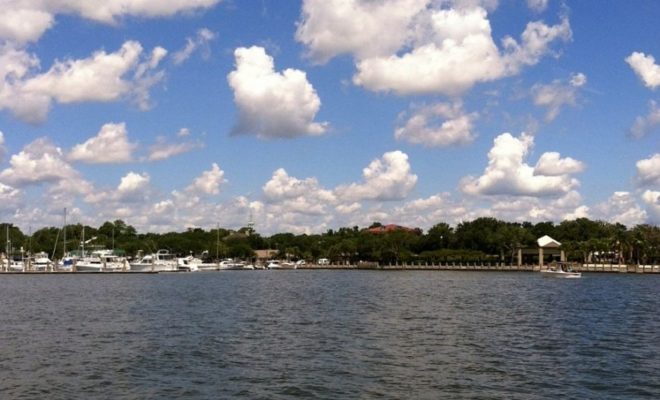